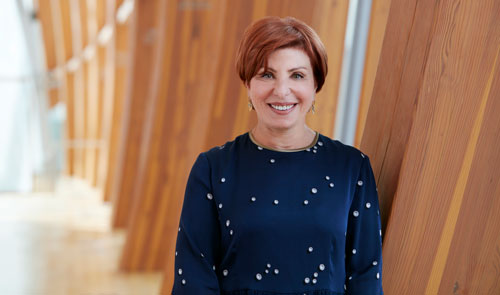 Sinai Health Foundation's Board of Directors is pleased to announce the election of Maxine Granovsky Gluskin, who will join David Cynamon and Howard Sokolowski, O.Ont. as Co-Chairs of the board.

“Maxine has been invaluable as a volunteer, fundraiser and champion. As Sinai Health approaches its 100th anniversary, we know she’ll be even more instrumental in helping the Foundation raise funds in support of world-class care and research at Sinai Health.”

“Sinai Health’s values and its leadership make it stand out from its peer institutions,” says Maxine. “It’s my privilege to support this progressive health-care institution that is so important and integral to the city.”

Maxine has served on the boards of Sinai Health and Sinai Health Foundation since 2018. She most recently co-chaired Sinai’s largest capital campaign in its history, Renew Sinai, which continues to raise funds for the expansion and modernization of the hospital’s facilities.

Maxine has also been deeply involved in advancing the mandate of Art Gallery of Ontario as President of its board of trustees from 2013-2017 and Vice President from 2005-2013. Currently she is honourary Chair of the board and chairs the Nominating and Governance committee. She has also served on many other not-for-profit boards such as the National Ballet of Canada, the Bentway and CIFAR to name a few.