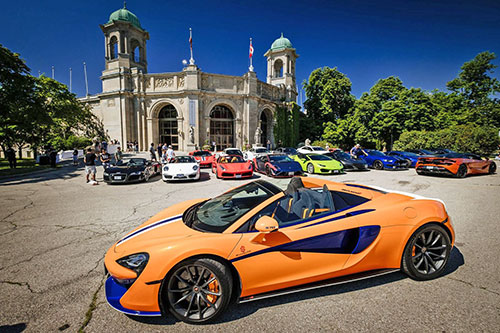 “Times are tough but I wanted to find a fun creative way to give back,” says Nick, President & CEO of Liberty Entertainment Group. “I thought, let’s take a negative and turn it into a positive.”

Nick approached the event organizers and suggested shifting its focus from an international, multi-day rally to a more local event that would give GTA car enthusiasts an opportunity to get their cars out on a sunny Sunday afternoon and support front-line workers from the safety of their drivers seats.

“Mount Sinai had to pivot, so we thought we should as well,” says Nick. “Knowing everyone would be in their own car and could keep their distance, it was the perfect opportunity.”

Registrations for the event were donated to Sinai Health Foundation to provide support for front-line workers through the pandemic. Local participants got to enjoy driving their super-cars through downtown Toronto, and also got satisfaction from knowing they were giving back to Toronto’s health-care heroes.

“Cars Care gave us an opportunity to invite a whole new crowd of people to come out and cheer on front-line workers,” says Nick. “It turned into a fantastic event.”

More than 100 cars and their drivers and passengers met at the Liberty Grand Entertainment Complex in Toronto’s Exhibition Place. The rally drove past Mount Sinai Hospital and Bridgepoint Active Healthcare. Nick the pace car at a leisurely 30km/hour as the cars cruised up an empty Don Valley Parkway.

The rally then proceeded to Casa Loma, where Nick presented a cheque for $75,750.* The cars were parked on display and participants enjoyed a physically distant barbeque lunch. 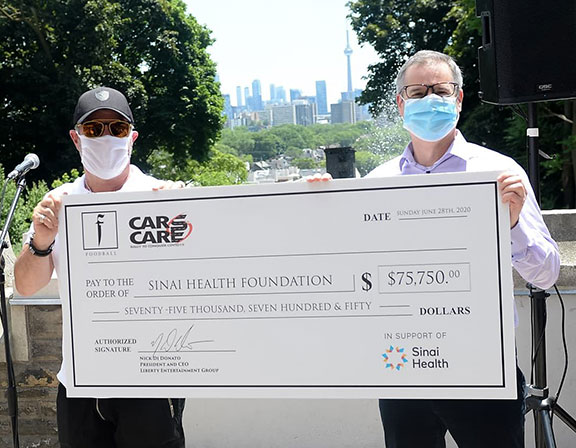 “It was an amazing outcome for an event that was going to be canceled,” says Nick. “We’re talking about turning it into an annual event.”

*Cars Care raised over $33,400, which was combined with the funds raised from the 2019 FoodBall, another unique fundraising experience that Nick also spearheads. FoodBall is an exclusive culinary experience featuring a curated roster of 40+ Chefs from around the globe highlighting their personal culinary styles with innovative tasting menus.