Looking beyond the broken wrist with Dr. Don Melady 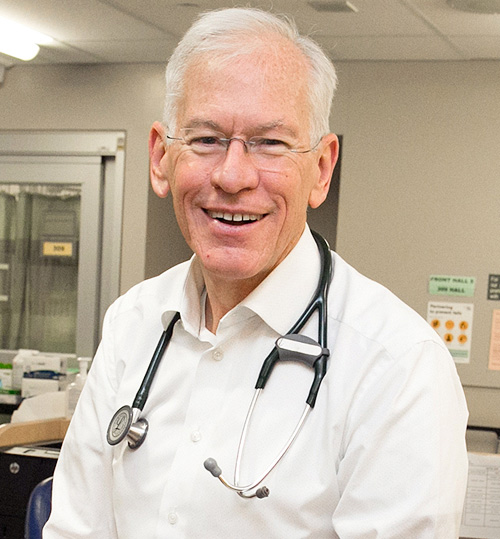 If the increasing number of older adults seeking care from Canadian hospitals is truly a silver tsunami, then Dr. Don Melady wants emergency departments ready to help steer the ship through the storm.

Don, a veteran emergency physician and geriatric lead at the Schwartz/Reisman Emergency Centre at Mount Sinai Hospital, has been preparing for such a challenge for three decades.

Eight years ago, he teamed up with a group of thought leaders from across North America to create the Geriatric Emergency Department Guidelines, a list of best practices for providing excellent care for older people in emergency departments.

“My task is to take what we know about best practices regarding the care of older people in emergency departments and not only change what we do in the Schwartz/Reisman Emergency Centre, but also spread that information across Canada, the United States and around the world,” says Don.

He’s the first to admit he’s running out of time. The entire health care system, from hospitals to long-term care homes, is already seeing increases in older adults requiring complex care. Research released in late 2019 by the National Institute of Ageing at Ryerson University shows if Canada continues on its current track, the cost of publicly funded long-term care for seniors is expected to triple in 30 years.

The case of a broken wrist illustrates the stark differences in care required for older adults compared to younger patients.

For instance, if a 40-year-old goes to the emergency department after breaking a wrist, it’s quite easy to focus on that one problem and fix it. However, when an 80-year-old goes to an emergency department with the same ailment, they likely have a lot more going on: possible cognitive impairment, a lack of support at home, mobility issues and a complex mix of medications for other chronic conditions.

“It’s a good example of how a broken wrist is not just a broken wrist for older persons,” notes Don. “The idea of a geriatric emergency department is that we focus on the whole patient and not just the broken wrist.”

That’s why he’s proud of the interdisciplinary team located in right in the Emergency Department that includes geri-friendly doctors, nurses, including a geriatric specialist nurse, a physiotherapist, an occupational therapist and a social worker. All of them can be involved with assessment of the older person.

“We really have an excellent approach at Mount Sinai’s emergency department regarding the care of older people,” Melady said. “I use it as a model for when I’m teaching other health care systems about what is possible.”

With a model already in place at Mount Sinai Hospital, Don is now focused on preparing other physicians and entire hospital systems across North America to undergo their own transition. Last year alone, he was involved with 50 hospitals and hospital systems in the U.S., as part of the GED Collaborative, helping prepare them for the upcoming influx of older patients requiring complex care.

“One thing I would like to do is to ensure that every emergency department in Canada is providing the same level of care to older adults that we do at Mount Sinai and that we develop the training and the research base to support that goal.”

He’s already got a program in place to help train the next generation of physicians to care for the older generation. The SREMI Geriatric Emergency Medicine Fellowship is the only one of its kind in Canada.

“It’s really about creating a next generation of emergency physicians who are experts and leaders in the field of geriatric emergency medicine who are going to be out there spreading this around the world,” he says.