Behind The Science: Jim Woodgett 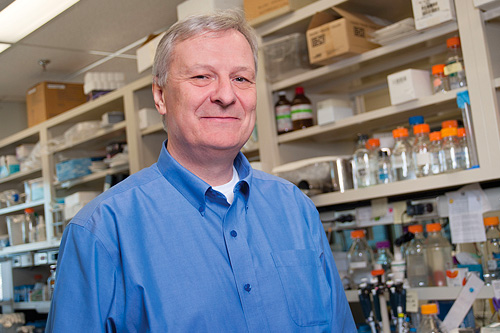 This interview with Dr. Jim Woodgett, senior investigator at Sinai Health’s Lunenfeld-Tanenbaum Research Institute, or LTRI, is part of Behind the Science, a regular series from Sinai Health Foundation that asks some of its brightest and world-leading researchers about what drives their curiosity about the human body in health and illness. Dr. Woodgett recently completed a 15-year term as Director of Research at the LTRI and is now back in the lab, looking at the manipulation of cell processes to treat certain cancers, diabetes and neurodegenerative conditions such as Alzheimer’s Disease.

What is your area of research and what are you hoping to discover?

We work on deciphering the messages cells use to communicate and make sense of their environment. These signaling networks are frequently disrupted in a variety of diseases including cancer, neurodegenerative diseases and depression. We use a variety of techniques to ask fundamental questions with the intent of identifying new clues for developing novel treatments.

What’s been your biggest ‘A-HA’ moment to date?

That it is important to keep questioning everything, because we too often assume that previous knowledge is correct, when it just happened to be the best information available at the time. We have the advantage of much improved technologies and scientific data now than even a decade ago. Some of the best questions are those that many ignore because they think they’re so obvious they must have been solved. For example, we have 20,000 genes, yet rely on only a handful of signaling systems to control everything, in every tissue.

What’s one of the biggest challenges you’ve faced and why?

Canada is a relatively small country by population and considering our modern society, we have a rather unsophisticated attitude to science. It’s been a Sisyphean task to convince governmental policy-makers of the importance of basic science as the driver of new ideas.

Unlike research that is closer to the patient, where the use is obvious, it requires extra clarity to explain why discovery science is important especially when outcomes are unpredictable. That’s because many of the biggest changes afforded by science emerge from ideas where there’s no immediate application.

Those discoveries lead to entirely new fields and opportunities. There is, of course, a need for all types of research but we tend, as a country, to neglect the more fundamental types of research, which is why the LTRI prides itself, and is known for, excelling in this area.

What’s been one of your greatest rewards in your career so far?

Being on speaking terms with a lot of brilliant people, of all ages. It’s not something that can be bought (or stolen).

What is one thing you’d like to accomplish in the next decade?

To have impact. That’s what we all want. And although it’s not something I can personally accomplish, I’d love to see a new, state-of-the-art building to house the LTRI and to provide its scientists with a conducive environment that matches their true potential.

Did you change any of your or your family’s habits as a result of anything you learned from your research?

My own research is quite a way from behavioural change learning the molecular secrets of signaling pathways doesn’t provide a lot of insight into everyday life but I think the scientific process impacts how I see things outside of the lab. It can help in seeing through difficult issues and to break down complexity. But applying logic often doesn’t help in relating to others. We are so much more than a collection of chemical reactions that obey laws of thermodynamics and we are also much less predictable thank goodness.

What advice would you have to share with your 19-year old self?

Turn down the amplifier and stand further back at concerts. My ears and the students upstairs will thank you. Otherwise, keep having fun.

I’m not a life planner. Some of the stuff I haven’t experienced is largely because I’ve actively avoided it: like sky diving or mountain climbing. Yikes. I need to be grounded. I do love live theatre and there’s a lot of Europe I’ve not seen, except from the window of a lecture theatre or back of a taxi.

Playing with my grandchildren. I don’t subscribe to 24/7 science. Successful researchers need to be able to see the world as it is, an environment full of beauty and mystery that begs to be appreciated, cared for and understood. In that sense, we are all scientists if we have any urge to seek why certain things are the way they are. Being able to relax is as important as being able to concentrate and one feeds off the other. Like a writer or an artist, there is nothing worse than to run out of inspiration as a scientist and so it’s incredibly important to nurture interests. Watching young children play is a window to how we learn. I think retaining some of the naïve inquiry of a child is an important trait for a scientist.

Who would you invite, alive or dead, to your dream dinner party?

A group of young teenagers who volunteered to have dinner with an old scientist showing that they value science and learning over video games and hanging out. I’d hope to inspire them to pursue a career in science, as it is so important to attract the most inquisitive minds regardless of background. Likewise, I know I’ll likely learn something new from them. Anyone can become a scientist, especially if you are open-minded and see things from a slightly different perspective. I do realize the “dinner” would probably be at a fast food joint.