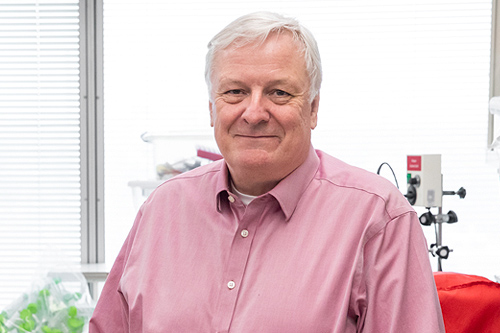 Vancouver, BC The Board of Directors of the Terry Fox Research Institute (TFRI) announces the appointment of Jim Woodgett, a senior scientist based at the Lunenfeld-Tanenbaum Research Institute (LTRI), part of Sinai Health in Toronto, as its new President and Scientific Director effective Aug. 1.

“Dr. Woodgett is an accomplished research leader and senior scientist with a track record for excellence and collaboration over several decades,” says Dr. Christopher Paige, Chair of the TFRI Board of Directors. “We are confident he is the right choice to captain our research endeavour and take us to the next level as we navigate new horizons with existing and new partners across the country — and beyond — in our shared vision to work together to accelerate precision medicine for Canadians.”

“I look forward to building on Dr. Vic Ling’s exemplary leadership and initiative in driving forward the enduring and inspirational vision of Terry Fox by bringing Canada’s best scientific minds together to control and find cures for the scourge of cancer,” says Dr. Woodgett.

Dr. Woodgett recently stepped down as director of Sinai Health’s Lunenfeld-Tanenbaum Research Institute, a position he held for 15 years. He continues in his role of senior scientist and internationally renowned biologist with LTRI at Mount Sinai Hospital conducting research in cell signalling and transduction pathways in cancer as well as in diabetes and neurological diseases. He has been a funded principal investigator, a grants panel reviewer and an educator as well as a leader and administrator. He holds a PhD in biochemistry from the University of Dundee (Scotland), has authored some 350 publications, taught courses on molecular biology, supervised hundreds of graduate students and given talks and lectures around the world.

“It has been a pleasure to serve as TFRI’s president for the past 14 years and I am delighted to be handing off the baton to Dr. Woodgett,” said Dr. Victor Ling, TFRI founding president and scientific director. “TFRI and our pan-Canadian research community will benefit immensely from Jim’s dynamic leadership, his many accomplishments in science and his commitment to research excellence. I wish him every success in this exciting new role.”

Dr. Woodgett will head TFRI as it is on the cusp of implementing two novel pan-Canadian projects that will change the future of cancer research and care in Canada. The Institute is expanding its mandate to accelerate precision medicine for Canadians through two new initiatives, the Marathon of Hope Cancer Centres Network (MOHCCN) and the Digital Health and Discovery Platform (DHDP).

He is a strong supporter of Terry Fox’s vision and legacy, including the hallmark programs that have helped to establish the Terry Fox reputation as a world leader in research excellence and team science over the past four decades, chiefly through the New Frontiers Program Project Grants and the New Investigator Awards. He is a formerly funded Terry Fox investigator (2011-2019) and past member of the TFRI’s Scientific Committee on Research Excellence (2016-18).

Dr. Woodgett will continue to be based at the Lunenfeld-Tanenbaum Research Institute in Toronto and will lead TFRI from that location as well as Vancouver.

“The Terry Fox Research Institute was created in late 2007 and has continued to evolve as a national leader and voice for cancer research while experiencing tremendous team science growth under the leadership and stewardship of Dr. Victor Ling. We share the same enthusiasm, excitement and confidence as Dr Jim Woodgett takes over as TFRI President and Scientific Director at a timely moment as TFRI launches the Marathon of Hope Cancer Centres Network.”
Mr. Darrell Fox on behalf of the Family of Terry Fox

“I am very grateful to Dr. Ling for the incredible legacy that he has created at TFRI. On behalf of our Board and team, I am delighted to welcome Dr. Woodgett to the Terry Fox family and I am really looking forward to working with him to build upon that legacy as we work together towards Terry’s goal to cure cancer.”
Mr. Michael Mazza, Executive Director of the Terry Fox Foundation

“Jim is a motivational leader, who has been instrumental in attracting exceptional researchers to the LTRI, both from Canada and abroad. His passion for translating the value of investing in research to the general public will continue to benefit both institutions. We join TFRI in congratulating Jim on his new appointment.”
Dr. Gary Newton, President & CEO of Sinai Health

“As co-lead of the of the Marathon of Hope Cancer Centres Network in Quebec I am pleased to welcome Dr. Jim Woodgett as scientific director of the TFRI. Jim is recognized for his leadership skills, scientific excellence and commitment to building and supporting the next generation of Canadian scientific leaders.”
Dr. Morag Park, Director, Rosalind and Morris Goodman Cancer Institute, McGill University

“As head of the TFRI Quebec Node I am looking forward to working with Dr. Woodgett. As one of Canada’s leading scientists, Dr. Woodgett brings his passion, his science and his administrative expertise to this leadership position.”
Dr. Anne-Marie Mes-Masson, Associate Director of Basic and Fundamental Research at the CHUM Research Center (CRCHUM)

About TFRI: Established in 2007, TFRI invests in world-class, collaborative cancer research teams and partnerships. Together with its research and funding partners, TFRI is working to inspire the transformation of cancer research in this country by bringing together leading cancer research and treatment organizations in Canada and empowering them under the framework of the Marathon of Hope Cancer Centres Network and the Digital Health and Discovery Platform. www.tfri.ca; www.marathonofhopecancercentres.ca; www.dhdp.ca

About LTRI: The Lunenfeld-Tanenbaum Research Institute, part of Sinai Health, is a leading biomedical research centre, ranking amongst the top biomedical research institutes in the world. Established in 1985, the institute is profoundly advancing understanding of human biology in health and disease. Many of the breakthroughs that began as fundamental research have resulted in new and better ways to prevent, diagnose and treat prevalent conditions. The institute is affiliated with the University of Toronto and is focused on women’s and infants’ health, cancer biology, stem cell biology and regenerative medicine, neurobiology, diabetes, arthritis, health systems research, population health services and solutions, and systems biology. www.lunenfeld.ca.