The Other Side of Menopause: Incontinence Support 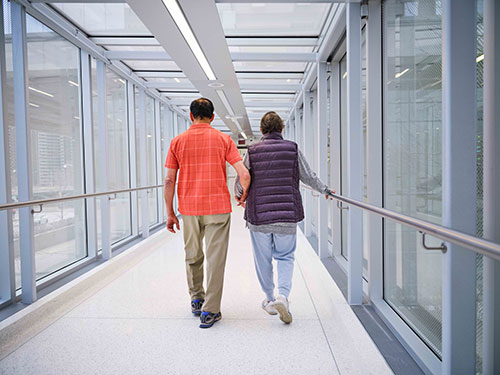 Diane had always been one of those people who had a bladder “the size of a peanut”. She was the friend who had to pee moments after the movie started, the one that mapped out rest stops on road trips. The idea that there was an actual medical condition causing her to urinate so frequently didn’t cross her mind.

What did require medical attention were her extremely heavy and painful periods. Starting at age 11, Diane would bleed so much and be in such intense pain that she would have to leave school. Like many young women, she dealt with the discomfort as best she could until, after the better part of a decade, she brought the issue to her doctor who put her on oral birth control pills. This was a temporary solution, but one that relieved the majority of her symptoms - but not her frequent need to urinate.

By the age of 26, Diane was suffering from debilitating headaches, attributed to the oral contraceptives she took. Coming off the pill seemed like an easy fix; however, the symptoms she had in her teen years, prior to taking the pill, boomeranged. Her periods were so painful and heavy that she threw up every month. She was exhausted and her iron counts were extremely low. Her doctor ordered testing that revealed she had multiple, large fibroids growing in her uterus. While these were the cause of her painful menstrual cycles, they also contributed to her constant and urgent need to pee, pushing on her bladder and causing it to contract. The fibroids were dealt with through a series of D&Cs - dilation & curettage - a process where the tissue from inside the uterus is removed. Diane’s painful periods got better, “But I was still always bursting when I had to go to the bathroom,” she says.

When Diane was perimenopausal in her late 40s, the issues with her bladder only got worse. She was dealing with the problem as best she could on her own. Diane says, “Even though I avoided drinking water, I was still getting up five or six times a night to go to the bathroom.” She was dehydrated and deeply sleep deprived and felt like her bladder was ruling her life.

Diane decided to bring up the issue with her family doctor, who referred her to a specialist at Mount Sinai Hospital. She was diagnosed with an overactive bladder. Dr. Colleen McDermott, a Urogynecologist at Mount Sinai Hospital and the President of the Canadian Society for Pelvic Medicine, explains the diagnosis: “Overactive bladder is a syndrome of urinary urgency, frequency and often urinary incontinence. It is extremely common and affects approximately 20% of the general population and is more common in post-menopausal women.”

Diane was presented with three options: medication, a “pacemaker” for her bladder, or Botox. Medication sounded like the least invasive choice, but the prescription wasn’t without complications. “Overactive bladder is often treated with lifestyle measures and oral medication; however, for many patients, medication does not improve their symptoms or it causes significant side effects,” says Dr. McDermott. For Diane, the side effects were so severe that the discomfort of constantly needing to urinate was the better option. So she soldiered on without relief.

About a year after menopause, Diane hit her breaking point. Her office had a small three stall bathroom, and one afternoon Diane walked in to find no vacancies. Having an overactive bladder means that you struggle to hold your urine, and the urgency and need to pee is always intense. Having no fast and easy access to a bathroom was the worst possible situation. She quickly left and tried to find a bathroom on another floor, but couldn’t make it. After this awful day, Diane knew that trying to manage her overactive bladder was no longer enough. She needed a solution. That’s when she was referred to Dr. McDermott at Mount Sinai Hospital.

You might hear “Botox” and associate it with cosmetic procedures of the face. It’s even used on underarms to stop excessive sweating. You might not know that it’s used for overactive bladders - but it’s use makes a lot of sense. Dr. McDermott explains: “We are able to do Botox injections directly into the bladder muscle to reduce bladder contractility and thereby reduce frequency, urgency, and incontinence. This mode of treatment can significantly improve the quality of life of patients where traditional treatments have failed.”

After the first round of Botox, Dr. McDermott told Diane that she could expect results within a week. Amazingly, after just two days, Diane could feel it working.

“I don’t have urge incontinence anymore - that feeling when you get home and you’re rushing to get the key in the door to run to the bathroom. I can stand and have a full conversation with a neighbour without worrying,” says Diane, “I can sleep. I can take trips without plotting the bathrooms. I can’t recommend Dr. McDermott enough. The care I continue to receive is exceptional.”

Botox isn’t a one-time solution. Diane goes to see Dr. McDermott every 6-8 months for more units of Botox, but she’s no longer held prisoner by her bladder, and for that she is grateful. “Women’s health issues are often overlooked,” says Diane, “But Dr. McDermott treats me with empathy, and the care is so personal.” Diane would tell any person who finds themselves in a situation like hers to not be embarrassed, and to get the help they need.