Looking at the science behind how the brain makes memories 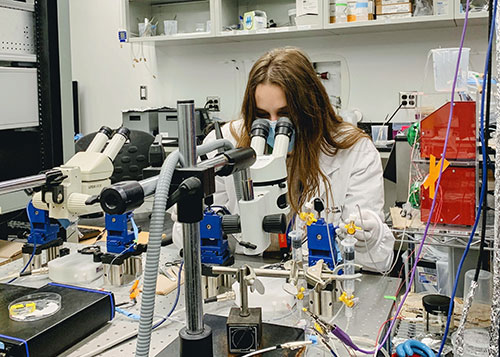 For the month of December, Sinai Health Foundation is shining a spotlight on three young scientists who are shaping the future of care as part of their work with the Lunenfeld-Tanenbaum Research Institute. The second scientist in our Research Wrap-Up series is Rasa Volianskis, a graduate student in the Graham Collingridge lab at the LTRI.

For many people, memories are made during life’s magic moments. For neuroscientist and graduate student Rasa Volianskis, the process is much more complicated than that. The 26-year-old is studying the mechanisms that underlie memory formation in the brain and role they play in one of the leading causes of intellectual disability.

Volianskis is studying Fragile X Syndrome, or FXS, in the Graham Collingridge lab at the Lunenfeld-Tanenbaum Research Institute (LTRI). FXS is the leading cause of inherited intellectual disabilities, and greatly affects a person’s development, behaviour and ability to learn.

“It’s something I’m very, very passionate about,” Volianskis said. “I’m interested in learning about what goes wrong when FXS occurs because it affects kids and it can be very devastating because it prevents them from doing normal activities when they get older.”

To learn more about how the brain functions with this disorder, Volianskis uses mice that have been genetically modified to model FXS, allowing her to evaluate whether certain drugs can improve their ability to learn.

“It all centers around the idea of synaptic plasticity, changes that occur at synapses in the brain, the connections between neurons that allows them to communicate,” Volianskis said. “Synapses undergo plastic changes during learning, which involves the strengthening and weakening of these connections. If synaptic plasticity is compromised, that’s when we see issues with memory and learning.”

Volianskis’ research focuses a specific process of synaptic plasticity, called long-term potentiation, or LTP, that’s believed to be critical in the encoding of new memories. She said that her supervisor, Dr. Collingridge, found that blocking the NMDA receptor, prevents LTP.

There are currently few drugs approved for the treatment of Alzheimer’s disease. One of them, memantine, is of particular interest to the Collingridge lab because it acts by blocking overactivation of the NMDA receptor. The team is currently exploring whether NMDA receptor activating drugs could also be useful for treating FXS.

Volianskis said she knew she wanted a career in science from a very young age. Both her parents were scientists; her father a neuroscientist and her mother a psychiatrist, so studying the brain seemed like a natural fit.

“The brain was always my first love,” said Volianskis. “I even wrote a high school essay on Alzheimer’s disease. To me, it was always such a devastating thing for a person to lose their memories.”

“This is basic science, which is the foundation for progress in the medical field, and one of the most exciting parts of what I do,” said Volianskis. “Discovering new targets for therapeutics and laying the foundation for something that then could be used later to impact patients.”