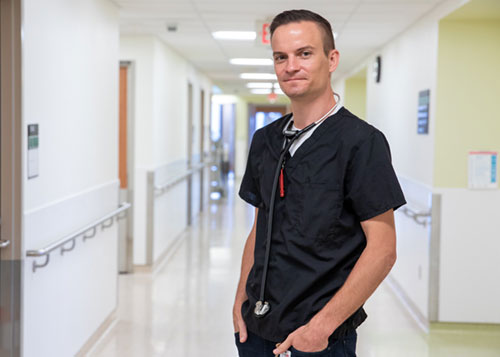 Frank always knew there’d come a time when he’d have to say goodbye to his mom. Then in 2016, the mother-son duo received word from Sinai Health cardiologist Dr. Susanna Mak that that his mom’s ongoing heart failure had taken its toll and losing her was all but inevitable within the next two years.

The news wasn’t a total shock. His mom was born with a genetic defect that caused the middle wall of her heart to never stop growing. Increasingly over her lifetime her heart had struggled to pump properly. As her main caregiver, Frank and his mom often found themselves in the emergency department to help manage her debilitating symptoms, like difficulty breathing.

“Dr. Mak was critical in helping us learn how to help manage her condition over the years,” Frank remembers. “There was no way in the world I could have done what I did for her had it not been for Susanna and her team at the Miles Nadal Heart Centre at Sinai Health.”

It was at that appointment that Dr. Mak offered Frank and his mother access to Sinai Health’s palliative care program. It came as a shock to Frank, who like most Canadians, assumed that was something only offered to those dying of cancer. In reality, only 47 per cent of patients with heart failure receive palliative care in their last two years of life, compared to 88 per cent of cancer patients.

“One of my biggest worries of bringing palliative care in is that they would help push her over the line,” Frank said. “I didn’t want to necessarily rush the process.”

After a first meeting with a palliative care physician, Frank and his mom decided they weren’t quite ready. According to Dr. Kieran Quinn, a clinician scientist in general internal medicine and palliative care at Sinai Health, a patient’s wishes are paramount when considering palliative care.

“Often people think palliative care is just restricted to providing patients comfort,” Quinn said. “It about more than that. It’s about improving their quality of life and giving them the treatments that align with what they want in life. Ultimately, it’s about letting them die on their own terms.”

Dr. Quinn’s own research showed the gaps and glaring need for palliative care to support heart failure patients. He found that 75 per cent of all patients in the community with heart failure died in hospital, even though 80 per cent of Canadians indicate they want to die at home.

“Our goal with the Heartfull Collaborative is to prove its positive impact on patients and caregivers through research,” Quinn said. “Then it’s about expanding this new care model of care to establish it as a national and international standard for all heart failure patients everywhere.”

Even though three quarters of people with heart failure currently die in hospital, Quinn and the Heartful Collaborative team found that providing palliative end-of-life care doubles the likelihood of dying at home.

By late 2018, as her pain and discomfort became more difficult to manage, Frank and his mother chatted once again about her wishes. She indicated it was time to consider palliative care.

“My mom didn’t want to leave us kids, but we all knew she was there, so we brought the palliative care team back in,” he said. “She always wanted to pass away at home. And this program helped her go out on her terms.”

With the help of a care team who made sure she was comfortable, Frank’s mother died on Christmas Eve surrounded by family.

“Palliative care helped us gently get her across the finish line,” Frank said. “By bringing in a care team, it took the burden of care off us and allowed us to enjoy those final moments. Everybody going through heart failure should have access to this level of care. It allowed us to let my mom pass at home.”