The miracle of Marshall: A mother’s Sinai Health journey through a high-risk pregnancy and heart complications 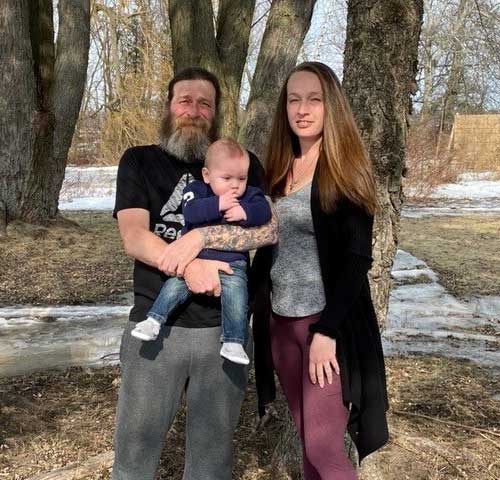 Dr. Candice Silversides is a leader in the growing field of cardio-obstetrics. Not only is she the Miles Nadal Chair in Pregnancy and Heart Disease at Sinai Health, but is also a cardiologist specializing in high-risk pregnancy management at both Sinai Health and University Health Network. It’s why so many expecting parents with underlying heart conditions turn to Sinai Health and Dr. Silversides to help ensure a safe delivery during high-risk pregnancies. It’s also the reason Jacquie Rombough knew something was wrong when Dr. Silversides, still in her street clothes, pulled her aside after a routine appointment.

Rombough’s relationship with Dr. Silversides began two years earlier. Born with a heart murmur that affects her heart valves, Rombough met with Dr. Silversides when she and her partner, Rob, were trying to get pregnant. At the time, an angiogram revealed one of her valves was shrinking. Dr. Silversides assessed the situation and reassured Rombough she could safely get her through a high-risk pregnancy.

After a vasectomy reversal and years of fertility treatments which were sidelined during COVID-19, Rombough and her partner learned they were pregnant during Christmas, 2020. 13 weeks in, Rombough went into Dr. Silversides’ office for an early pregnancy check-up. Holding back tears, Rombough still remembers Dr. Silversides’ words mere moments after her appointment finished: “I’m not supposed to see you, but I have to see you. You’re not okay.”

Although she says she felt perfectly fine, Rombough’s shrinking heart valve was now rapidly deteriorating and was told she needed open-heart surgery - a procedure her unborn child would likely not survive. Rombough recalls the excruciating questions that raced through her mind. “Do I leave my fiancé with a baby if I don’t make it? What if both the baby and I don’t make it?” After a long talk with her fiancé, Rombough says her family wasn’t ready to give up.

“We fought so hard to get pregnant. The emotional turmoil of it all, I wasn’t ready to have an abortion.” Rombough informed Dr. Silversides she’d rather take a chance on becoming a mother, rather than abort and start all over again.

Less than three weeks later, Rombough went in for open-heart surgery to repair her failing heart valve. Four weeks after that, another procedure to insert a pacemaker. Dr. Silversides and the entire medical team were with her every step of the way.

“I specifically remember coming out of surgery, and within 48 hours - as soon as I could get my phone back - Dr. Silversides was calling to check on me, and to make sure they checked on my baby.” Rombough emphasizes how not even a global pandemic could sideline Sinai Health’s level of care. “We’re in the middle of a pandemic and still made the time to double check that I was okay, that I had someone to take me to my appointments, and if not - they were willing to come down to the car to bring me upstairs. It really warms your heart because they went that extra mile.”

August 9th, 2021. Rombough and her partner, Rob, welcomed baby Marshall into the world. A healthy baby boy, Marshall is always on the go responding well to treatment for bilateral club feet, and be warned: if you have food in front of him, be prepared to share.

Rombough says she can’t pick a favourite part about being a mom. “I could just stare at him all day long. He was a miracle right from day one. He fought to be here just as much as Rob and I fought for it. He’s just amazing.”

As for Dr. Silversides and the team of doctors, nurses, and receptionists, Rombough says a simple “thank you” barely scratches the surface. “Without them, there’d be a lot of broken hearts. Without them, these babies wouldn’t exist. There’s a lot of babies that should be named after them all,” says Rombough. “I know it doesn’t all end the way mine did, but a big thank you is needed for the men and women who dedicate their lives to these babies. I wouldn’t have Marshall without them, and I’m forever in debt for everything they’ve done.”