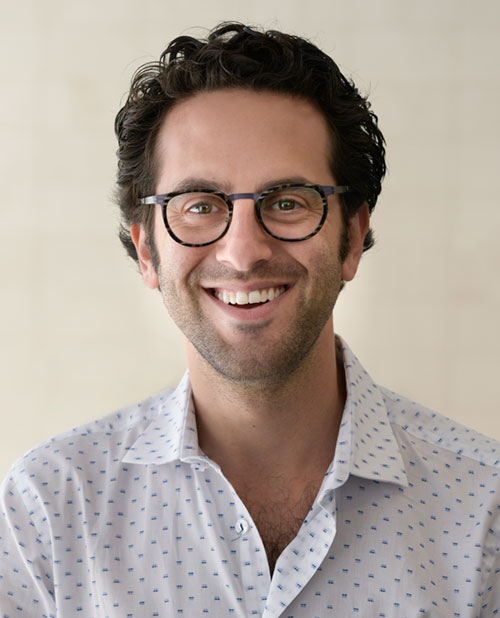 There are several hospitals between cottage country and downtown Toronto, but there’s a reason Sinai Health’s Dr. Jesse Wolfstadt just accepted a patient transfer from Georgian Bay. He’s one of the most sought-after Orthopaedic Surgeons specializing in knee replacements, and whether it’s from around the corner or across the province, Sinai Health is where patients are sent when other hospitals are faced with joint replacement challenges they can’t solve.

Sitting behind his desk at Mount Sinai Hospital, Dr. Wolfstadt’s office is filled with the usual medical accoutrement: degrees, diplomas, and thick textbooks. But Dr. Wolfstadt also has an entire shelf devoted to sports memorabilia. A die-hard Raptors fan and recovering Leafs fanatic, Dr. Wolfstadt knows the importance of maintaining a healthy, active lifestyle and this is the driving force behind how he cares for patients who want their mobility back.

Just 10 years ago, a hip or knee replacement meant a three - or four-day hospital stay. A decade before that, patients were looking at a 10-day stint before going to an inpatient rehabilitation hospital. Today, Dr. Wolfstadt and the Sinai Health team have formulated a plan that has patients resting at home with their families the same evening as their surgery.

“I think it’s very important for the patient to recover at home,” says Dr. Wolfstadt. “There are lower rates of complications, lower rates of 30-day re-admission, and better outcomes overall. They’re home, they can sleep well. Obviously, they need to be well-supported, but they tend to do better.”

This focus on ERAS, or Enhanced Recovery After Surgery, is a joint effort years in the making. When Dr. Wolfstadt joined Sinai Health in 2018, he got to work developing a game plan for getting patients up and out of bed sooner.

“We collaborated with anesthesiologists to create a new standard,” explains Dr. Wolfstadt. “That meant maximizing non-opioid medication so patients don’t get nauseous and loopy, which helps people get ready for physiotherapy more quickly.”

“It was the pandemic that turned on the light switch,” says Dr. Wolfstadt. “If we wanted to do joint replacement, it had to be outpatient. Luckily a lot of the work we had done with enhanced recovery after surgery had us prepared. Plus, it freed up beds needed for COVID-19 patients.”

Much of Dr. Wolfstadt’s work focuses on the future of orthopaedic surgery, and that means doing away with outdated thinking.

“Most orthopaedics research is based on anatomy of middle-aged white men from middle-class America,” says Dr. Wolfstadt. “Similarly, the knee replacement component is made with a North American white male in mind. Not everybody is the same, so putting everybody’s replacement in at the same angles and cuts is not the right thing to do.”

“People hear ‘robot’ and think the robot is doing the surgery,” says Dr. Wolfstadt. “Instead, the robot will allow us to study putting implants in at different alignments and figure out what’s best for each patient. In the future, we can make more educated, analytic decisions for, say, a 58-year-old female patient of Afro-Caribbean descent.”

Until robots come into play, Dr. Wolfstadt’s greatest reward is seeing the difference he’s making in the lives of his patients.

“What puts a smile on my face is seeing a patient six weeks after a knee replacement and they tell me they’re able to chase around their grandchildren, or patients sending me videos of them playing soccer, waterskiing, and weightlifting,” boasts Dr. Wolfstadt. “I have one patient who is an actor, and he sends me footage of him in commercials and movies. It’s those moments that truly make me happy. What we do is making a difference in people’s quality of life.”