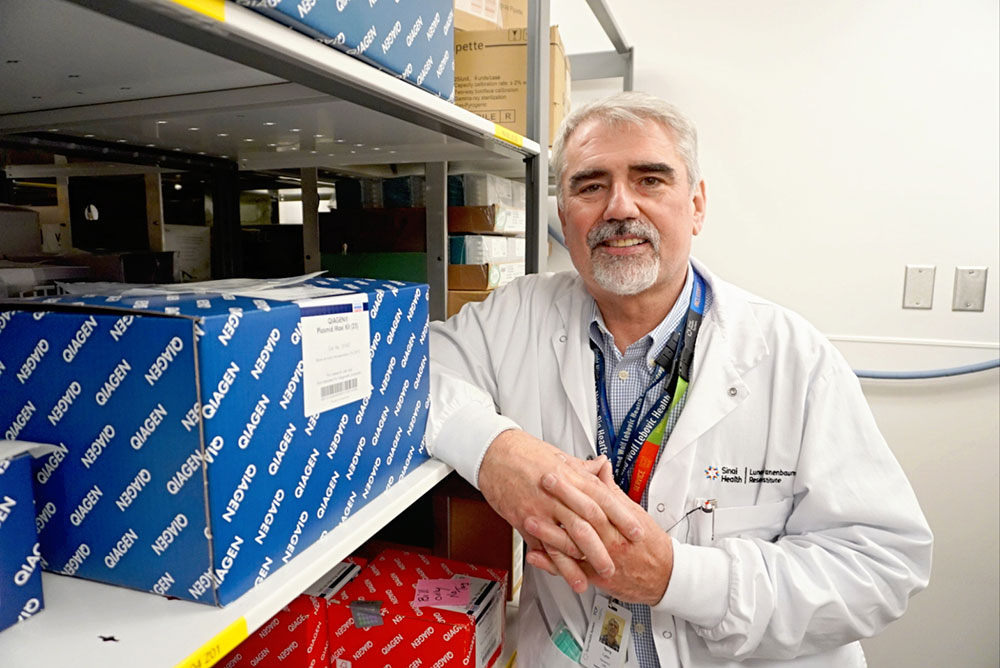 Behind every breakthrough at the Lunenfeld-Tanenbaum Research Institute (LTRI) is a man named Terry Cater. However, unlike some of the big names in the research world, Cater’s name never appears on a research paper or splashy news article about a life-changing discovery.

The longtime Sinai Health staffer didn’t follow the typical route to wind up in one of the world’s best biomedical research institutes. Instead of universities, PHDs and fellowships - Cater started at the bottom, quite literally, cleaning out animal cages in the basement of the LTRI.

For a man who grew up in Toronto’s Regent Park neighborhood and dropped out of school to work at the tender age of 12, the job was the starting point for something greater. But what Cater lacked in education, he made up for with an inexhaustible work ethic.

“I started working with the animal colony and happened to catch the eye of the director at the time,” Cater says. “Over time I was promoted to glass washing, then moved into LTRI’s receiving area and eventually running the receiving area for the institute.”

As Cater climbed his way up in the LTRI, he went back to school and got his high school diploma. He now manages more than $2 million worth of medical supplies coming into the LTRI each year.

As the coordinator of the LTRI’s receiving area, Cater started paying attention to what supplies were coming in each day - a diverse list of pharmaceutical supplies including solutions, enzymes, and plasticware like pipettes and petri dishes. And what he saw was an opportunity for savings.

Cater cites one example as an opportunity for cost-savings. One enzyme commonly used in scientific experiments would typically cost the principal investigator $100 to order - plus another $100 for shipping alone.

Cater thought the LTRI could have more buying power if he created a collective of smaller suppliers, bundling orders together, ultimately bringing in bigger orders for the companies who in turn agree to provide discounts or waive shipping fees. Now nearly all orders go through Cater’s BioBar and the savings are passed on to the scientists.

“We save on average about $300,000 a year in shipping costs alone for the LTRI,” Cater said. “I do everything I can to help our labs. And I respect our labs and I know how hard they work for their money. The money is finite, it’s so limited, so my goal is to stretch it as far as it will go.”

It’s no stretch to say Cater has given more than just savings to the LTRI. He’s helped raise more than $300,000 to support various initiatives within the institute, including $65,000 to celebrate the LTRI’s 25th anniversary. His colleagues have taken note of his incredible contributions as well. In 2007, he was named as a recipient of the Karen McGibbon Award. These annual awards recognize the Bright Minds and Big Hearts that exemplify the core values of Sinai Health.

After spending three decades as LTRI’s supply man, Cater still loves supplying the breakthroughs at the LTRI one order at a time.

“I love it. I love my job,” Cater said. “I love my people. I love the interaction. This is a family here. You work eight to 10 hours a day. You’re here half your life. I treat them like my family.”