Chipping away for a charitable cause 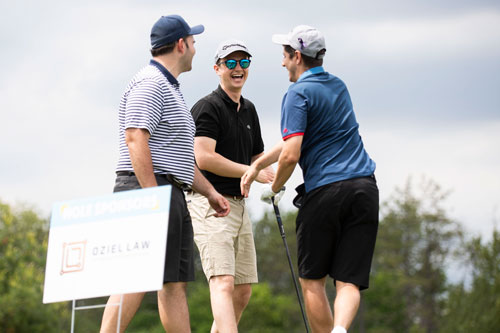 Swing for Sinai co-chair Robert Disenhouse doesn’t back down from a challenge. In fact, he seeks them out.

Just one month before this year’s Swing for Sinai charity golf tournament in support of the Ontario Fetal Centre (OFC), Robert found himself in Muskoka pushing his endurance to the limit: running, cycling and swimming more than 100 kilometres in his second-ever Half Ironman competition.

“Until recently, I’ve never done a triathlon before,” says Disenhouse, sitting in front of his prized collection of sports memorabilia. “But my motto is it’s only crazy until you do it.”

That same motto and commitment to seeing things through translates into his philanthropic pursuits.

Disenhouse first got involved with Sinai Health around 2017 with Serving for Sinai - a volleyball tournament in support of the Lunenfeld-Tanenbaum Research Institute. The experience sparked Robert’s passion for giving back to his community, and it wasn’t long before he decided to branch out and develop a tournament of his own.

“I’m more of a golfer than I am a volleyball player,” he admits. “And I was at this point in my career where I was eager to take on a different challenge, something bold. I wanted to take on a leadership role and bring people together to give back to Sinai Health.”

Robert got to work. He pitched the idea to his network, gained a co-chair in Adam Gurza, recruited a committee, and Swing for Sinai was born. The concept? A battle-of-the-business-style golf tournament, pitting young professionals from across various industries against each other on the course, making for a great day of golf and networking, all in support of the OFC.

Based at Mount Sinai Hospital, and in partnership with The Hospital for Sick Children and the Ministry of Health and Long-Term Care, the OFC is the first of its kind in Canada, and one of only a few centres worldwide to offer a fully comprehensive range of fetal therapy, including cutting-edge in-utero medical and surgical interventions for sick babies. With a world-renowned team of experts, the OFC offers the best and most advanced care to some of the highest-risk pregnancies in the province.

“The Ontario Fetal Centre is a mission-critical initiative Sinai Health is running,” says Disenhouse. “It really resonates with me. I was born at Mount Sinai Hospital, and my late Grandfather was a paediatric cardiologist on staff at SickKids, so the OFC’s mission has a special place in my heart. Knowing that myself and so many others have all been safely brought into the world under the roof of Mount Sinai Hospital adds special meaning to our efforts.”

The inaugural Swing for Sinai in 2019 was a smash success, but just months later COVID-19 hit, putting the future of Robert’s new charitable venture in jeopardy.

“At the height of this pandemic we were locked down, golf courses were closed,” recalls Disenhouse. “Then things started to open up, and last summer allowed us to pursue the event again. Everyone was really excited to get back together in person, and the feeling was mutual for this year’s tournament.”

Despite the gap during the pandemic, Swing for Sinai had raised more than $140,000 in its first two tournaments, and after this year’s event, which raised over $41,000, that total number has surpassed $185,000.

Reflecting on how far Swing for Sinai has come since its inception, Disenhouse says it’s been a challenge, but with that comes reward.

“It’s a lot of work managing Swing for Sinai on top of my day job, my family and social life, but you just remind yourself what you’re doing it for,” he says. “We are simply bringing a group of like-minded young professionals together to raise funds for a good cause. Being able to cultivate the next generation of talented leaders and inspiring a new wave of community involvement - it’s very fulfilling.”

His message to anyone inspired to launch their own charitable initiative for Sinai Health? Disenhouse circles back to his motto.

“It’s only crazy until you do it,” he says. “It just takes the right people and the right support. The challenge is worth it.”

Learn more about Swing for Sinai