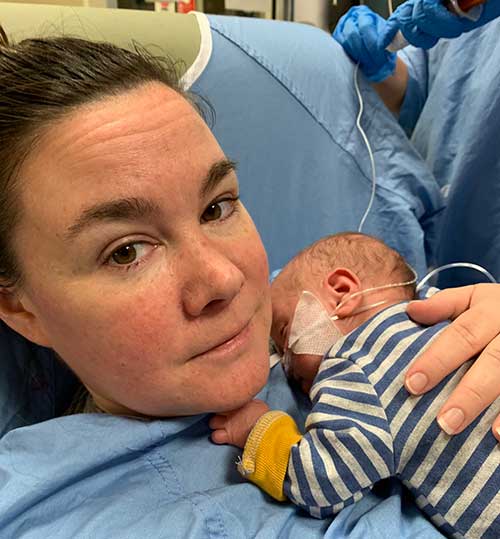 It’s a change many expecting mothers anticipate: the moment their pants no longer fit and it’s time to reach for a larger size to accommodate their baby bump.

But during Sabrina Hawkes’ second pregnancy, she was still wearing her regular clothes at five months. To her, it was an alarm bell.

“With my first child, I kind of popped between four and a half, five months,” Hawkes said. “With this pregnancy, I noticed I was still wearing my regular clothes. That's when I realized something is different.”

The Angus, Ontario, mother’s first son, Talon, delivered without a hitch. He was a big, healthy baby -- born two weeks overdue. Her and her husband tried for years for a second child, and had pretty much given up -- when, Hawkes got pregnant at 40.

A routine 20-week ultrasound showed the baby was on the small side about half the size he should have been. Further tests revealed there was likely an issue with one of the arteries connecting the baby to the placenta. Hawkes’ doctors immediately sent her to see a specialist at Mount Sinai Hospital.

“They said it is the best possible place for me to be,” Sabrina said. “If you do have to have the baby early, this is where the baby should be because of their NICU.”

“We care for very preterm babies,” said Dr. Young. “Sometimes we've had babies as small as 22 weeks gestation. They're usually within the realm of one pound.”

Soon after arriving at Mount Sinai Hospital, Sabrina was told they were likely going to deliver her baby that day at only 27 weeks. “I just remember texting my husband saying, ‘They're going to take him out today,” and he's like, “What do you, what do you mean?’ Sabrina recounts. “This poor man is running around trying to pack a bag for me, trying to do all the things that I wish I was home to do for him.”

Tristan was very ill, and his doctors weren’t sure why. He was being watched around the clock, at times doctors jumping in to resuscitate the fragile little boy. 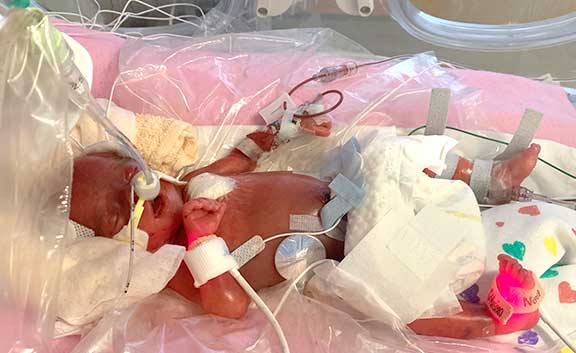 The first few days were difficult, but Sabrina said she and her husband felt heard. The doctors knew their names and they knew details about Tristan. This exceptional sense of caring took away a lot of their anxiety. And, the doctors and nurses expected the couple to be involved in Tristan’s care, in a very hands-on way. This included participating in daily rounds and updates on his condition.

“When they come in and they ask a question as simple as, ‘How long has he been breathing like that?’ or ‘Have you noticed any discoloration in this area on his leg?’” Sabrina says, “And then you're telling them and they're really listening to what you're saying. That just provides a sense of calm and a sense of value.”

The feeling of being listened to and taken seriously is part of Mount Sinai Hospital’s NICU philosophy, called family-integrated, or FICare. The backbone of this approach is viewing NICU parents as integral members of the NICU care team. They, alongside nurses, physicians, and other medical staff, provide active care for their infant, and are encouraged to be the infant’s primary caregiver from the beginning.

Dr. Young says there is evidence of short and long-term benefits when parents play a larger role in the direct care of their infants in the NICU.

“Studies had shown that the outcome of these babies were better in terms of their weight gain, their length of stay in hospital, and just being successfully able to transition a baby to home because the parents are so involved in the care,” Dr. Young said.

Tristan stayed in the NICU for almost four months, gradually gaining strength and weight until he was ready for discharge. For Sabrina, leaving Mount Sinai was bittersweet.

“I was such a mess,” she said. “It felt like I was leaving family.”

These days, Tristan is coming along well. “He is the sweetest, most mischievous little guy I could have possibly imagined,” Sabrina says, “I see him and I see how far he's come. And I don't think he would be where he is now if he hadn't been born at Mount Sinai. I really don't. I think their care made all the difference in the world to the outcome that we have right now for our son.” 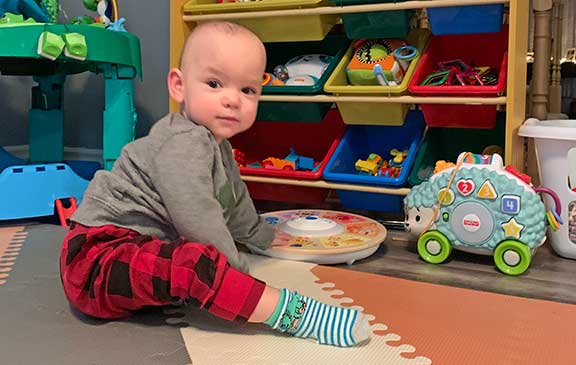