High-risk pregnancy during the COVID-19 pandemic 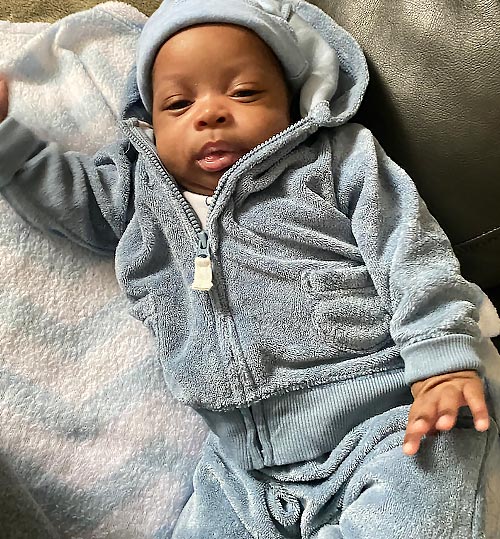 Natalie Palmer hoped her fourth pregnancy would be an unremarkable one. With three children already, the busy mom had her hands full. Then, she was diagnosed with placenta previa. The condition is a relatively rare complication of pregnancy, wherein the placenta partially or totally blocks the cervix. It can be very dangerous for both the mother and the baby, and typically results in a delivery by caesarean section. Placenta previa’s most common symptom is vaginal bleeding, which is painless but often alarming.

After experiencing a few of these bleeds, Natalie landed in Mount Sinai Hospital’s Antenatal Unit. Although scared, Natalie was grateful to be cared for by specialized doctors and nurses. Then, at only 29 weeks pregnant, she started experiencing contractions. She was rushed to the Labour and Delivery floor, as the medical teams worked to prevent her labour from continuing. Thankfully they were successful, and Natalie was returned to the Antenatal Unit for recovery.

After four days of constant monitoring, she was ready to be discharged from there. In normal times, Natalie would have been moved to Sinai Health’s hospitality care area, ensuring she was close to the Antenatal and Labour and Delivery units, but not occupying a hospital bed when she no longer needed one. COVID-19, however, changed everything. No one including Natalie wanted to be in the hospital for longer than was necessary. And, she missed her family. After being in the hospital for almost a month, she was anxious to see her husband and her children.

But, going home wasn’t an answer. Natalie’s family home is in Whitby, which puts her too far away from Mount Sinai Hospital, where she was receiving specialized care for her high-risk pregnancy. She had been treated once at her local hospital, but knew they didn’t specialize in treating rare pregnancy complications like Mount Sinai Hospital did. Natalie was conflicted, worried, and stressed, none of which helped her or her unborn baby’s health.

Then, a Sinai Health donor stepped in. Willing to underwrite the cost of hotel room stays, this donor ensured that expectant mothers like Natalie were able to stay close to Mount Sinai, thus guaranteeing they would receive optimal care, while also allowing them to reconnect with their families.

Natalie moved to the nearby Marriot Hotel for a week, and her husband and kids visited constantly. Things were looking up, but then Natalie suddenly had another bleeding episode, and lost a lot of blood. Her husband rushed her to Mount Sinai which was just a few minutes away from their hotel. She was admitted and taken immediately to surgery.

Because of her placenta previa, Natalie had to have an emergency c-section, but also an emergency hysterectomy, to save her and her baby’s lives. Thankfully the procedures went smoothly, and on January 21, at just 31 weeks and 2 days, her son Jacob was born. Weighing only 3lbs and 9oz, Jacob went straight to the NICU.

Natalie and Jacob both recovered well, and after a few weeks Jacob was stable enough to be transferred to a NICU closer to home. Natalie says her recovery is going well, and Jacob is growing and gaining strength daily.

Of her time at Mount Sinai, Natalie says she received great care from everyone at Mount Sinai Hospital: “Doctors and nurses everyone I came in contact with were really amazing.”