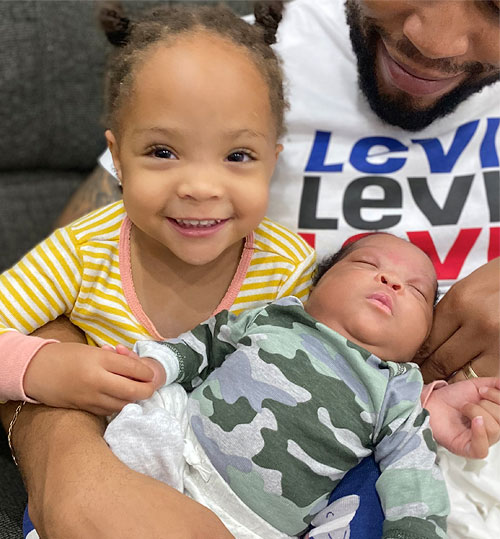 In the fall of 2019, Jilliann Palmer was pregnant with her second baby. Her due date was still a few months away right at the end of December. But around Thanksgiving that year, her water suddenly broke. Jilliann was immediately hospitalized, with the hope that around-the-clock attention would prevent her from going into early labour.

For three weeks she stayed at Mount Sinai Hospital, but her daughter was determined to make an early entrance, and on October 21, little Penelope made her appearance. As a result of this early labour, Jilliann was warned that if she got pregnant again quickly - within a year or so - she would automatically qualify for Mount Sinai Hospital’s special pregnancy program.

Jilliann and her husband knew they wanted more kids, so when they found themselves pregnant again in early 2021, they immediately became patients of Dr. Rebecca Menzies. Jilliann’s pregnancy progressed relatively uneventfully for the first six months. Because of her history, she had appointments every one to two weeks, and had to drive in from Brampton for each one, but she was optimistic that all would be well.

At 24 weeks, during a routine examination, Dr. Menzies noticed that Jilliann’s cervix had shrunk significantly. Jilliann was admitted to hospital for a weekend, received two rounds of medication, and was then discharged, but told to remain close to the hospital. She was now a high risk pregnancy patient, which meant she needed to be close to Mount Sinai Hospital at all times, in case she needed urgent care. Her home in Brampton was unfortunately not close enough. So, Jillian became a participant in Sinai Health’s Hospitality Program.

Before the COVID-19 pandemic, the Hospitality Program meant that high risk patients like Jilliann stayed at Mount Sinai Hospital, where they had instant access to the specialized care they may need. But the pandemic’s demand for hospital beds and the desire to minimize the time in-hospital for all but essential needs meant that the Hospitality Program in 2021 was completely different from what Jilliann experienced her first time around. This time she and her family stayed in a hotel a 10-minute drive away from Mount Sinai Hospital. A Sinai Health Foundation donor underwrote the cost of the hotel rooms used by the Hospitality Program, to ensure all Sinai Health moms and babies could stay safe, and stay with their families, during a difficult time.

As Jilliann, her husband, and their two children settled into the hotel room lifestyle, Jilliann began to feel more comfortable. She was close to help, should she need it, and her family was by her side. But one morning she work up and wasn’t feeling great. She pushed through the day, trying to dismiss her worries. That night she woke up to use the washroom and after some confusion, realized her water had broken. She was only 27 weeks pregnant so this was too early for labour. Roughly ten minutes later, the labour pains kicked in.

Jilliann called her mom and sister, who came to the hotel room to look after their children, as Jilliann and her husband drove to Mount Sinai Hospital. They called the triage nurse on their way, so when they arrived at the hospital they went straight into an examination room. After a quick examination, Jiliann learned she was already 7 cms dilated, and that her baby was in breech position. This meant Jilliann was going to have an immediate emergency cesarean-section birth.

This announcement came as a total surprise to Jilliann. During her appointments with Dr. Menzies they hadn’t ever discussed a possible c-section, as everything had been going so well with the pregnancy and Jilliann was taking all possible preventative measures.

As Jilliann adjusted to this news, she received another blow: her husband would be unable to join her in the operating room. After she was wheeled in for the procedure, he sat outside the room, stressing about his wife. A doctor he didn’t know walked past him and noticing his stress, stopped to ask if he was ok. When he explained his situation, the doctor Dr. Elyse Levinsky sat with him for the duration of the c-section, explaining what was likely happening to his wife and child, and helping him manage his anxiety. Jilliann says it’s moments like these that really made her and her husband feel supported and cared for, despite the pandemic and the complications of a high-risk delivery. Dr. Wendy Whittle was the doctor who performed Jilliann’s c-section. After the procedure, she waited until Jilliann had recovered from the general anesthesia before taking the time to explain the surgery and what to expect moving forward. Jilliann says Dr. Whittle’s empathy and patience made a huge difference to them, and Jilliann and her husband remain grateful that she was the doctor on call that night.

Little Nathaniel was born on July 27, weighing 2 lbs and 5 oz., and whisked straight into Mount Sinai Hospital’s NICU. Jilliann is recovering well from the procedure, and Nathaniel is continuing to progress. Jilliann and her husband are back at home in Brampton, driving in every day to bring the baby breast milk and to visit with him. Jilliann and her husband know that Nathaniel is where he needs to be, getting the absolute best care from some of the most amazing nurses. Nathaniel’s primary nurses are Li Chen and Julius Edouard Ho - who also cared for Penelope during her NICU stay back in 2019! The pair give Jilliann and her husband such a peace of mind day in and day out, and Jilliann says, “We have the utmost faith in the entire NICU team. We often refer to them as some of the world’s most special people.” Nathaniel’s family hopes to see him stabilize enough that he can be transferred to a hospital a little closer to home in the near future, and their ultimate goal is to see him discharged from hospital around his due date, which is October 22.

Of their experience at Mount Sinai Hospital, Jilliann says: “The entire team everyone we’ve come into contact with at Mount Sinai - has been truly such a blessing, and such a breath of fresh air. You hear horror stories about doctors that don’t take the time to explain things, or practice with such a lack of empathy, but our experience has been the complete opposite of that. We’re so grateful and so happy, and we feel so indebted to these amazing doctors and nurses because they have all been truly so amazing.”