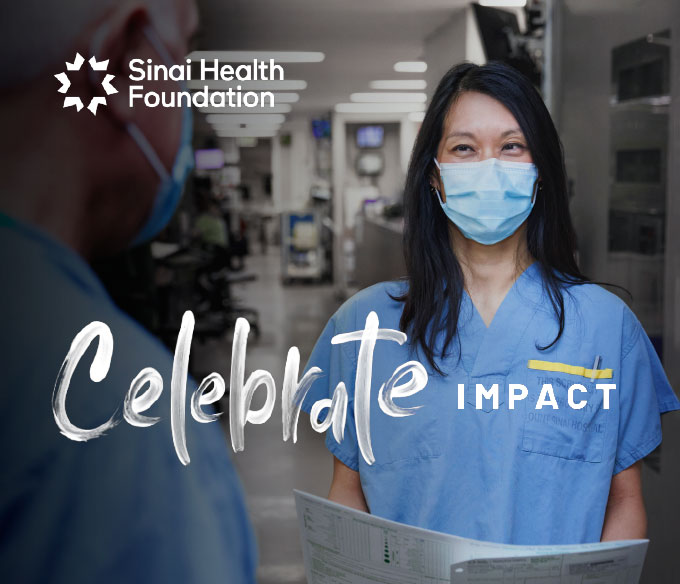 What doesn’t kill you makes you stronger

This year, Sinai Health received one its most generous gifts at one of the most poignant times in our collective history. Shawn Kimel, long-time Sinai Health supporter and his partner, Kate Schatzky, gave a transformational gift of $21 million that will not only support the redevelopment of a state-of-the-art Intensive Care Unit at Mount Sinai Hospital, but will also invest in groundbreaking research at the Lunenfeld-Tanenbaum Research Institute.

To be inspired by their gift is to learn where the motivation comes from, their own story of hope and resilience, and the desire to impact countless lives. Here is their story.

One September day in 2017, Kate Schatzky found herself standing in Sunnybrook Hospital, next to the unconscious, unresponsive, body of her partner, Shawn Kimel. Reeling from the surprise and the severity of the damage his bicycle accident had caused him, Kate found herself wondering, “What if I never get to hear his voice again?”

Thankfully, Shawn improved relatively quickly. “Although his initial improvements were very small - moving his thumb or wiggling his toe - just the fact that he showed advancements so early gave me hope,” Kate says. After just under one week in Critical Care, Shawn was transferred to the ICU, where he spent an additional two and a half weeks. Despite having experienced a stroke that led to left hemiplegia, pneumonia, and at one point requiring a craniotomy, his recovery continued. Through it all, Kate was at the hospital every day with Shawn, being hands-on in his care.

Roughly two months after the accident, Shawn was transferred to the Toronto Rehabilitation Institute, where he lived for another 1.5 months. After they left TRI, Kate recalls, “I was fortunate to be able to build a strong private rehab team well in advance of Shawn being discharged, which was a little over three months after the accident. His recovery will continue for the rest of his life.”

Reflecting back on all they’ve been through, Kate says she’s grateful for the experience. The connection she and Shawn share is deeper and stronger as a result of his accident. “I think about our time in the hospital often. Oddly, those days were some of the happiest of my life. I didn’t want him to suffer, but I enjoyed being there, learning how to navigate the medical system, being part of his care, helping other patients and families, and being surrounded by doctors, nurses, PSWs and the amazing hospital staff, who are the most dedicated, special people I’ve met. Each day I was fully present and had a strong sense of purpose. Nothing else mattered. I only wanted to be in the hospital with him, by his side.” As a result, leaving TRI and returning back to their home was bittersweet for Kate. “I was lucky to be able to be there with him between 14-18 hours a day, for three months straight. It was difficult for me to break that routine - lose the focus and the familiarity - and go home again.”

During those months, Kate amassed many memories. She says it’s the families of the patients who really stuck with her. “I have a lot of stories. Unfortunately, most are not as positive as ours, which is the hardest part,” says Kate. “Support for patients and their families is such a critical part of the recovery process. Not every family has our resources or capacity. And what about patients who have no family or support systems, the people who are the most vulnerable. We want them to have access to a positive recovery, too.”

Shawn’s family has a history of supporting hospitals and healthcare through its philanthropy, so to Shawn and Kate their transformational donation to Sinai Health was simply the right next step. And the connection to Sinai Health was a natural one for them. “Shawn feels such a strong connection to Sinai Health. His children were born here and he’s been a donor in the past both to the hospital and research institute. Additionally, because of its location in the heart of the city, Sinai treats patients from many diverse communities, including people who are experiencing homelessness and poverty. This is important for us. A hospital needs to meet the needs of, and be accessible to, all communities in an effective and sensitive manner, and we know this is a priority for Sinai Health.”

The connection to Sinai Health’s Lunenfeld-Tanenbaum Research Institute (LTRI) is also important to Shawn and Kate. “In Canada, there is often a lack of support and funding for scientific research. We believe in the value of supporting our scientists, who are some of the best and brightest in the world. It’s also critical that Canada is competitive globally in the realm of scientific research. Sinai’s LTRI is a key part of this equation.”

Read the Globe and Mail's story on Shawn Kimel and Kate Schatzky's donation to Sinai Health.