Love, loss, and beacons of light 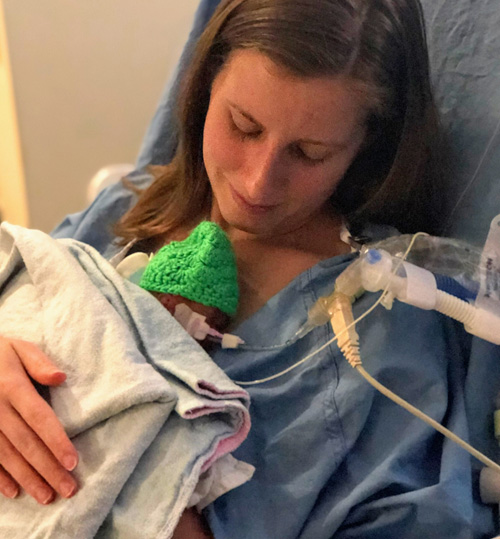 Kieran Powers always knew she wanted children, so in 2015, when she was diagnosed with cervical cancer, her thoughts turned quickly to motherhood. The treatment she received was fertility-preserving, and after she went into remission, she and her husband, Dylan, decided to up their timeline on starting their family.

She became pregnant quickly and was ecstatic, until it was discovered to be an ectopic pregnancy, and she wound up at Mount Sinai Hospital for an emergency surgery to remove a ruptured fallopian tube. Because of this impact on her fertility, she and her husband moved to fertility treatments, and a little over a year later, following their first IVF transfer, Kieran was delighted to discover she was pregnant again.

Because of her history with cancer, Kieran knew she’d be a high risk pregnancy. She was referred once again to specialists at Mount Sinai Hospital for close monitoring and everything was going well. Her scan and tests were all normal, she found out she was having a little boy who loved to kick his mama. When she was in her 21st week, she woke up early in the morning and felt a gush. She went to the hospital where it was confirmed her water had broken, and she was admitted for observation overnight. After stabilizing, she was sent home with an order to be on strict bedrest. 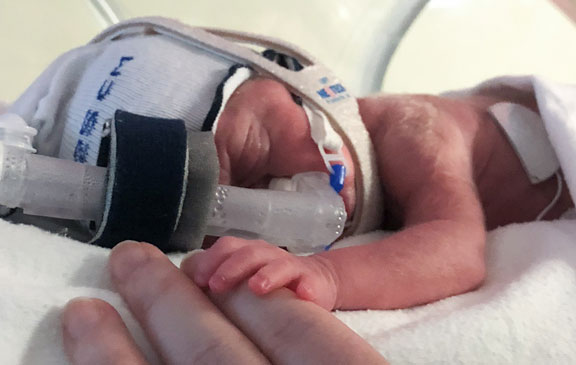 A week later Kieran returned to the hospital for a scheduled steroid shot. Feeling ‘a bit off’, she flagged for her doctors that she suspected something was not right. They immediately examined her and discovered she was two centimetres dilated. She was admitted once again, with another order for strict bedrest, and told that she wouldn’t be leaving until her baby was born hopefully weeks or even months later. The very next day her umbilical cord prolapsed, and she had to be induced. 36 hours later, Kieran’s son Beckett Brian Powers was born at 23 weeks and 5 days, weighing 1 lb, 2 oz.

Beckett was immediately whisked away to be resuscitated, and Kieran and her husband realized his prognosis was not good. Although the medical team was successful in reviving Beckett, he was without oxygen for a long time, and they weren’t able to say whether his heart was beating naturally or because of the medication he was receiving. Kieran and Dylan were told that Beckett was unlikely to survive, despite the team’s best interventions. They then made the most difficult decision a parent can make, and chose to stop life support. Beckett was placed on Kieran’s chest, and he spent his short life surrounded by love. “He was impossibly small and impossibly perfect. We spent about 8 hours cuddling him and making as many memories as we could”, says Kieran.

Kieran says a strong memory for her during this time is the support she received from the Sinai Health nurses. One of them made Beckett a bracelet with his name on it, and another brought him a gown, hat, and blanket. Kieran says this level of care and compassion made a huge difference to her and Dylan during such a dark time.

Roughly five months later, after having been referred to Sinai Health’s Dr. Wendy Whittle and her pre-term program, Kieran and Dylan had another IVF transfer and were pregnant again. Because of her history Kieran was monitored even more closely with weekly scans and regular tests. Again everything was going well, she learned she was having another boy who kicked his mom right where his big brother had. Then at her weekly scan when she was in her 20th week, there was a slight change to her cervical length and her and Dr. Whittle’s contingency plan sprung into action. Kieran was put on strict hospital bedrest where she hoped to spend the next few months before her baby made an appearance. 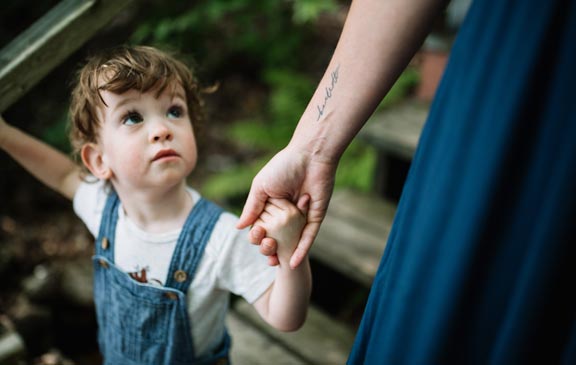 Things were stable for the first week and a half, but then Kieran’s water broke. Concerned she was reliving history, she spent the next few days taking medications that aimed to stop her contractions, and help her baby’s lungs and brain. Things seemed to be calming down again, and then one morning during a routine ultrasound the nurse noticed the baby had sunk very low, and was moving out of Kieran’s uterus. Despite not experiencing contractions or any other signs of labour, this meant Kieran had to head immediately to delivery. At 22 weeks and 5 days, Lincoln Wyatt Powers was born, punching and kicking, something unusual for such a premature baby.

After what they’d been through with Beckett, this seemed like a best-case scenario to Kieran and Dylan. Lincoln was intubated, taken to the NICU, and started to show signs of progress, but it wasn’t all easy. Lincoln had a bumpy NICU journey, with multiple kidney infections. At just ten days old, one infection became septic and turned into meningitis which spread throughout his body. “I was terrified he wouldn’t survive. He was so tiny, and the infection seemed so big,” says Kieran. But Lincoln was determined, and he beat this and two more subsequent infections. He also struggled with breathing, and was taken off breathing support mechanisms multiple times, only to be put back on them. Despite these setbacks, after 3.5 months in Mount Sinai Hospital’s NICU, Lincoln had stabilized. He was then transferred to Michael Garron Hospital, which was closer to home. After six weeks there, Lincoln was discharged and sent home.

Today Lincoln is a busy and thriving toddler, who turned three in early May. He still has some health issues which are being monitored, particularly with his kidneys and lungs, and has periodically received physio support and speech therapy. This spring will see Lincoln attending his final neonatal follow up at Mount Sinai Hospital, where Kieran says, “he’s treated like a little rock star! He’s surpassed any expectations any medical specialists had set for him, and has a bright, future in front of him.” 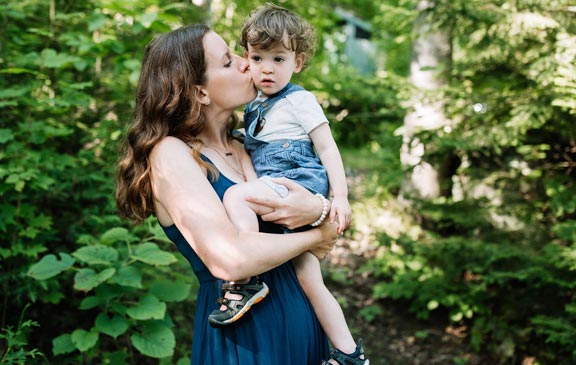 When not busy chasing after her rambunctious toddler, Kieran shares about her journey to support other families going through loss and prematurity through an initiative she calls Becoln. “It’s named after Beckett and Lincoln, my beacons of light.” Kieran also runs a program with her mom and aunt called Beckett’s Blankets. Through this program they donate sets of matching blankets to Mount Sinai Hospital, for the micropreemie babies that pass away. One blanket goes to the baby, and the other for the parents to take home.

Kieran says the care she and Lincoln received from Sinai Health staff, particularly Dr. Wendy Whittle, was beyond outstanding. “Lincoln’s middle name is Wyatt, which we chose because of the W, in honour of Dr. Wendy Whittle. I truly believe that she saved his life in more ways than one. She was also such a good support for me, really listening to what we wanted, how we wanted to handle things. She advocated for us as though she was advocating for herself. She is just the most amazing human being.”