Pregnant and COVID-19 positive: a story of hope 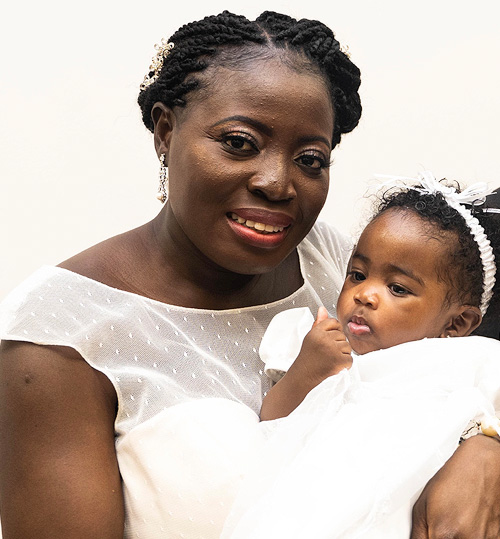 As a long-term care nurse, Solace Attopley was on the front lines of the pandemic when her help was needed most. On her last day before maternity leave she was working a double shift. Just days earlier, her facility had announced an outbreak of COVID-19. At the time, Solace was 26 weeks pregnant with her second child, Emmanuella, and the pregnancy was considered high-risk owing to her sickle cell anemia, so she was advised by her obstetrician to begin maternity leave early. On that final day, Solace stayed and worked an extra shift to help cover staffing shortages due to the outbreak.

The following day, she came down with symptoms of COVID-19. It started with a cough and fever, but when she began experiencing chest pains, Solace was admitted to Mount Sinai Hospital. “I was scared because I was told that if things got worse, they might have to do an emergency Caesarean section to deliver the baby early.” For three weeks, Solace experienced improvements and setbacks. Twice during her stay, she had to be transferred to the intensive care unit because of respiratory problems. On top of her own health and isolation, she also worried about the toll it was taking on her family, especially her five-year-old son, Samuel.

Fortunately, with the diligent care and unique expertise of the Mount Sinai team, Solace was able to make a full recovery. “I’m back on my feet now,” she says, gratefully. “But it was an experience I wouldn’t wish for anybody.”

As for her experience at Mount Sinai, she feels fortunate to have been under such exceptional care. “The nurses were amazing. Anytime I called for help, they knew what to do,” says Solace. “And the doctors took their time to explain what was going on and what they were going to do for me. I would say I had the best care.”

In February 2021, Sinai Health reconnected with Solace to learn how she and Emmanuella are doing. Solace says Emmanuella is a busy seven-month old, has just started crawling and is keeping her on her toes.

Solace’s health is also doing well. She has made a full recovery from COVID-19 and while her sickle cell anemia is still an ongoing issue requiring regular bloodwork, Solace says she feels great.

“I’m on maternity leave now, and I’ll be honest, it’s challenging. I have a six-year old as well, who is doing online school from home, and we’re just being very cautious. Every day when he finishes school we go for a walk around the building, but then we come back up to our apartment.”

Solace plans to return to her work as a long term care home nurse, once her maternity leave wraps up, and is working with her doctor to determine when she can receive her vaccination. She says being on leave during the pandemic has led to a strange first year with Emmanuella something many new parents can attest to. While they don’t get regular interactions with family and friends, they do video chats often and Emmanuella now recognizes the phone and wants to join in all of Solace’s calls.

Reflecting back on her time at Sinai Health, Solace cannot speak highly enough of the care she received. ”The nurses at Sinai were really, really wonderful. I cannot thank them enough. They all went above and beyond to provide me with such exceptional care, even with all the restrictions in place at the time.”