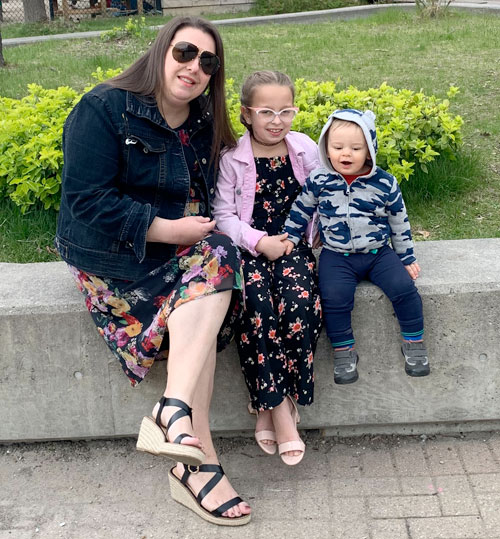 Eugenia Lopes got the surprise of her life when she discovered she was pregnant with her first child — five years prior, at just 25 years old, she had experienced early menopause and was told she could never have children. Finding out she had gestational diabetes was considerably less of a shock.

“To be honest, I wasn’t surprised,” she says. “I was kind of expecting it.”

Both of her sisters had had gestational diabetes when they were pregnant, and her father had been diagnosed with type 2 diabetes in his early 50s. And although she was careful with her diet, it wasn’t enough. “I mean, believe me, I tried. But sometimes it doesn’t matter how much you try, sometimes it doesn’t work,” she says.

At 24 weeks pregnant, Eugenia was screened for diabetes and, although her sugars were a little elevated, she was told it wasn’t anything to be concerned about; however, another test at 31 weeks confirmed it was gestational diabetes.

Gestational diabetes typically appears during the second or third trimester of pregnancy, affecting one in 10 pregnant women over the age of 30. It occurs when a woman’s body can’t produce enough insulin to cope with the effects of a growing baby and changing hormone levels. High blood sugar levels may then result in such complications as preeclampsia, abnormal sugar levels in the baby, a large baby (increasing the likelihood of a C-section or a birth injury) or even serious cardiac, brain or spinal anomalies. The good news is that after giving birth, gestational diabetes usually goes away

“I saw my sisters going through their pregnancies and it’s not the end of the world,” says Eugenia. “So to me, it is what it is. You get diabetes, you deal with it.”

Eugenia was referred to Dr. Denice Feig, the Head of the Diabetes in Pregnancy Program at Mount Sinai, and her team monitored Eugenia closely until she was induced at 38 weeks. Luckily, everyone’s efforts were rewarded with a healthy baby — Eugenia’s daughter Eva Sophia was born in August 2012 at eight pounds 13 ounces — and Eugenia’s gestational diabetes subsequently cleared.

Unfortunately, however, three years later Eugenia was diagnosed with type 2 diabetes at age 34.

“I would be shopping with my husband, and then all of a sudden I would tell him, ‘I have to sit because my vision is blurred, I can’t see well.’ And he was thinking that it was stress, and I said, ‘Well, whatever it is, I need to get myself checked out.’”

Neither of Eugenia’s sisters, ages 43 and 42, had gone on to develop type 2, but research by Dr. Feig has shown that 40 per cent of women who develop gestational diabetes will subsequently do so sometime in the next 16 years.

“Pregnancy is like a stress test,” explains Dr. Feig. Women who have a genetic tendency towards diabetes have to secrete more insulin to overcome the insulin resistance caused by the hormones, “and those who can’t do it develop gestational diabetes. Many of them are at risk for and do go on to develop type 2.”

Research by endocrinologist Dr. Ravi Retnakaran, the inaugural Boehringer Ingelheim Chair in Beta-Cell Preservation, Function and Regeneration in the Leadership Sinai Centre for Diabetes, has shown that the risk is slightly higher in women who develop gestational diabetes while carrying a girl, as Eugenia did. His team discovered that women carrying boys had slightly higher glucose levels and this was associated with a higher risk of gestational diabetes — meaning women who developed gestational diabetes while carrying a girl had poorer beta-cell function because they had developed the disease even without the extra sugar hit of carrying a boy.

Importantly, a diagnosis of gestational diabetes is a critical opportunity for early intervention to try and prevent the progression to type 2, says Dr. Feig.

Dr. Retnakaran adds that researchers at Sinai Health have discovered there is a reversible element to beta-cell dysfunction early in the course of diabetes, and they are doing trials with different interventions, trying to “fix” that reversible component.

“Ideally you want to do it even before the person develops diabetes,” he says. “That’s how you would prevent diabetes. So now we’re focusing on interventions to try and stop people from progressing to diabetes after we’ve identified them as being at risk — such as women with gestational diabetes.”

For now, though, pregnant women need to be vigilant, says Dr. Feig. After their babies arrive, they need to get their recommended glucose tolerance test. If they don’t, and develop undiagnosed type 2 and aim for a second pregnancy, the outcomes can be much worse. Type 2 presents with higher rates of stillbirth and an increased risk of serious congenital anomalies.

“Unfortunately, the rates of postpartum mothers completing that test, globally, are disappointing,” says Dr. Retnakaran. “It’s understandable to a degree, because obviously new mothers are busy and it’s hard to take that time for their own care, but it’s really important.” 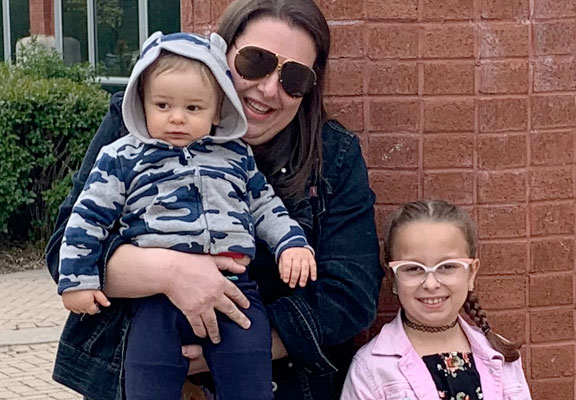 Meanwhile, Eugenia had the second surprise of her life when she became pregnant again. This time, as she already had type 2 diabetes, she was referred to Dr. Feig earlier, at 16 weeks.

“When I started out, there weren’t any women with type 2 during pregnancy,” says Dr. Feig, “because I was told type 2 was a disease of 50-year-olds. Over the last 20 years, the prevalence has increased so much that the rate of type 2 has overcome the rate of women with type 1 in pregnancy.”

“Mount Sinai has a great team of gynaecologists and specialists that monitored my high blood pressure, my diabetes,” she says. “They were always on top of things and gave me the best care that I could possibly have.”

Sinai Health checked back in with Eugenia recently to see how she and her family were faring. When the pandemic first hit, she and her kids found themselves stuck in their apartment while her husband worked long hours as a grocery store manager. Eugenia admits she began eating out of boredom and her weight ballooned. “I’m not a homebody,” she laughs. “Like a lot of people, I was eating everything in the house.”

By July 2020, she was back to working part-time as an optician and even though her sugar levels were only slightly elevated, she knew it was time to take control of her weight again. Eugenia’s now following a high protein, low carbohydrate and low sugar diet. She’s lost more than 50 pounds and best of all, her sugar levels are under such tight control, she no longer needs to take diabetes medications.

While her son naps in the afternoons and her daughter studies, she fills the time cooking healthy recipes and sharing the bounty with family and friends.

Eugenia appreciated Mount Sinai’s specialized diabetes team who “were very helpful and very accommodating” and set her on the right path during her pregnancy. While she already had some knowledge of diabetes through her family history, many of the pregnant women in her educational session knew very little, she observed. “It’s really useful for clearing up misconceptions.”