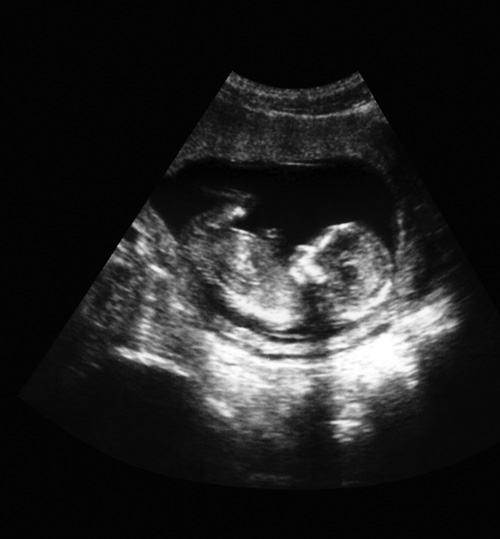 Alana Robertson was thrilled to be pregnant, and was happily attending all the doctor’s appointments and tests pregnancy requires. When she went in for her standard 20-week ultrasound, she saw a lemon sign on the imaging test. She had no idea what it signified. Little did she know how much and how quickly she would learn about that symbol, and what it meant.

Placed on ultrasound tests to refer to the shape of the developing baby’s brain, it’s typically a sign of spina bifida, a condition which can lead to an inability to walk, fluid on the brain, and other life-long challenges.

Alana was shocked by what doctors said next: “They said the baby might be incompatible with life.”

In the case of Alana’s baby, the spinal cord was not fully covered at the lower level of the spine, causing fluid to leak, pushing the brain and curving it down into the top of the spine. Facing the possibility of devastating news, Alana tried to remain positive.

“I'm a mental health crisis worker, so that requires a certain attitude,” she said. “My job has prepared me to deal with all sorts of crises. So I felt like maybe this path was kind of made for me.”

Alana’s doctors referred her to a special pregnancy program at Mount Sinai Hospital and to the care of Dr. Tim Van Mieghem, a maternal-fetal specialist, who offered Alana a treatment plan that could drastically improve her child’s future mobility.

The condition would require a surgery on Alana’s unborn baby while he was still in the womb. The procedure had only been performed twice in Canada at that point, and both times at Mount Sinai Hospital the only place in Canada where the surgery is offered.

The fetal surgery is offered through the Ontario Fetal Centre, a partnership between Sinai Health and the Hospital for Sick Children. While the procedure doesn’t cure spina bifida, it can increase a child’s chance of walking independently to about 40 per cent, compared to just 20 per cent without intervention.

“Many kids will still be dependent on walking aids or a wheelchair later in life to get around,” Dr. Van Mieghem said. “But the more strength they have in their legs, the more they can do independently.”

The surgery Alana and her baby would undergo is a lengthy one. The surgeon cuts into the uterus and floats the baby up to the top, in order to access its spinal cord and close the skin over the spinal cord to stop the fluid from leaking. This allows the fluid to build back up to normal levels, helping the brain return to its normal position.

The surgical team also closed the exposed nerve endings which prevents them from getting damaged by limiting their exposure to amniotic fluid. This will help the child maintain function in their legs. Dr. Van Mieghem and his team now perform about 10 of these surgeries each year. After a successful operation, Alana’s son, Deacon, was born via C-section.

“I remember holding him for the first time,” Alana said. “It was the most beautiful moment, ever. I cried a lot.” Deacon now loves showing his mom how much he likes to move.

“He just started walking independently,” she says. “He had braces and a walker, but now he prefers to walk without them. The other day we came home and he said, ‘I want to play soccer.’ And we got a soccer ball and he was kicking the ball on his own two feet!”