It seemed he was destined to die: At 17 weeks in his mother’s womb, Elijah Gibbons was far too small. His umbilical cord was extremely thin; he had fetal growth restriction and, worst of all, he was donating most of his blood and nutrients to his identical twin, Jakoby.

But he did survive. Today, Eli is a thriving 14-month old, already showing a quiet focus and maturity forged, his parents believe, by his fight to survive harsh conditions in the womb.

“We call him our miracle baby, because he really has no business being here,” says his mother, Lauren. “What he has overcome already is truly nothing short of a scientific miracle and, we believe, a God-given miracle.”

Identical twins run a 15 per cent risk of developing a heartbreaking condition called twin-to-twin transfusion syndrome (TTTS), in which nutrient-rich blood is diverted from one twin to the other through their shared placenta. As a result, one baby loses all of its amniotic fluid and may have a smaller share of the placenta, hindering its growth, while the other produces an excess of amniotic fluid and can develop severe heart failure.

Traditionally, there wasn’t much doctors could do, other than deliver very prematurely or document the slow death of one or both babies on ultrasound. Then doctors developed a surgical intervention to buy time by draining fluid from the mother’s womb and hoping the punctures wouldn’t trigger premature delivery.

In 1990, a new procedure was developed to cut the ties that bind identical twins in the uterus — separating them before birth. Doctors at Mount Sinai Hospital, who treat some of the highest-risk pregnancies in Canada, have been performing the surgery since 1998. So it was natural that Lauren’s physicians at McMaster Children’s Hospital referred her to Dr. Greg Ryan, a world-leading TTTS surgeon and Head of the Fetal Medicine Program at Mount Sinai.

“They said we would be in the best hands in the country by far,” recalls Lauren, of those terrifying first days. 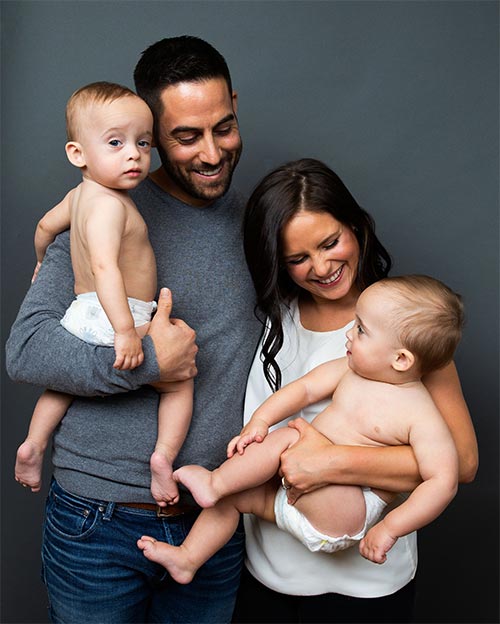 In the ultrasound exam room, Dr. Ryan didn’t mince words. He told Lauren and her husband, Joe, that theirs was a particularly bad case. For the syndrome to be discovered at just 17 weeks was itself a sign of its severity: TTTS is usually diagnosed several weeks later. “He said, ‘This is not going to get better,’” Lauren recalls, “‘and if we don’t do anything, there is an extremely high chance that neither baby will survive.’”

“She was at such an early stage of pregnancy that the twins didn’t have a fighting chance of survival outside of the womb for at least another 10 weeks,” says Dr. Ryan. “I would have been extremely pessimistic about her chance of taking home two healthy babies.”

The couple faced an impossible choice: sacrifice Eli to ensure Jake’s survival or do nothing as both babies slowly died. A visiting physician from Denmark, Dr. Lone Nørgaard, gently began discussing the first option, called “selective termination.” Then Dr. Ryan proposed an alternative.

It was not without risk, but Dr. Ryan is a world leader in a procedure that could save both babies by separating the blood vessels that joined them.

Fetoscopic laser ablation is like a “heat-seeking missile,” finding and destroying the vessels passing blood between the twins, says Dr. Ryan. The procedure allows him to insert a tiny telescope, guided by ultrasound, into the womb without opening the mother’s abdomen. He identifies the vessels that are causing the problem, and then “zaps” them closed with a laser beam.

“You can fire it through water or membrane and it doesn’t do any harm,” he says. “The laser only releases its energy when it encounters blood.”

The surgery would be performed in what is now the Ontario Fetal Centre (OFC), which offers fully comprehensive fetal services at Mount Sinai in partnership with The Hospital for Sick Children — the first of its kind in Canada and one of only a few in the world. Dr. Ryan, Head of the OFC, had already been part of the team that performed Canada’s first surgery to repair spina bifida in the womb as well as Canada’s first fetal cardiac surgery. And the team has taken on other in-utero procedures to save the lives of unborn babies with similarly serious conditions, referred from across, and sometimes outside of, Ontario.

But this surgery came with serious risks: It would fail if even one tiny blood vessel were left open. Meanwhile, the surgery itself could trigger early labour which, at 17 weeks gestation, neither baby would survive.

“The choice was up to us, but there was so much confidence coming from Dr. Ryan,” recalls Joe. “We decided we weren’t going to walk out of there with anything less than our two healthy babies.”

In the operating room, the staff asked Lauren, a professional vocalist, if she’d like to pick the music. “Considering how life and death it was, and how terrified we were, we couldn’t believe the confidence that was being shared by the team,” recalls Joe. “It was just oozing out of that room.” They chose Otis Redding.

When the lasers began, “I was fairly out of it, but I remember it was like a game of Star Wars,” laughs Lauren. “It was just such a surreal, wild kind of thing. Every time they would block a blood vessel it was like popcorn in my stomach.”

They could see their babies up close — their eyes, their legs, even the placenta, which lit up every time a laser hit.

The surgery looked to be a success: An ultrasound the next morning revealed two steady heart-beats. Lauren and Joe returned to Guelph — not out of the woods, but breathing a little easier each day. 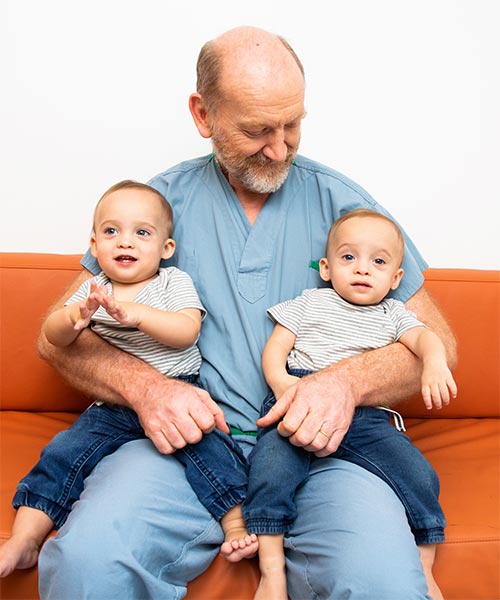 Dr. Greg Ryan, Head of the Ontario Fetal Centre, meets Jake (L) and Eli (R) for the first time, after leading the in-utero surgery that saved their lives.

A Celebration in the Ultrasound Room

The next major benchmark was something that Lauren found surprising, even a little funny: the growth of Eli’s bladder.

“A growing bladder meant he was peeing and creating amniotic fluid because he was no longer donating blood to his brother,” she says. “Every time we saw that his bladder was just a tiny bit bigger, it was like a celebration in the ultrasound room. We were so happy and proud.”

The babies continued to grow and improve, flying past crucial checkpoints at 24 weeks, then 28 weeks, 30, 32, until finally, at 35 weeks, with Eli’s cord blood flow looking a bit low, Lauren’s doctors decided to induce birth.

The next day, following a 27-hour labour, Lauren gave birth vaginally — an unusual development for a pregnancy that had been so complicated. Afterwards, it was shocking to see the placenta. All identical twins share a placenta, but in this case, doctors estimated 85 per cent had belonged to Jake. His umbilical cord was thick and healthy, while Eli’s cord looked like a thin thread.

Jake was born first, weighing five pounds, four ounces and Eli followed two minutes later — born breech and weighing just three pounds. The brothers spent a month together in the neonatal intensive care unit. But since then both boys have been growing and thriving, hitting their development milestones.

“The first time I got to touch Eli, a three-pound baby, I could not believe the strength that came from his body,” marvels Joe. “In his very first photo,” says Lauren, “his arm is up and he’s flexing. We remember looking at him in sheer amazement. It was like he was saying, ‘see, Mom and Dad, I’m so strong’.”

Too Many Undetected Cases

Dr. Nørgaard, the visiting specialist from Denmark, returned home and shared the news of the spectacular surgery and delivery she had been part of. So Lauren and Joe’s experience contributed to the advancement of TTTS treatment in Denmark in two important ways: Danish physicians are now beginning to offer TTTS patients laser ablation surgery as an alternative to selective termination, as well as the option of avoiding a C-section at birth.

Advancing fetal medicine around the world is a major goal of Sinai Health’s teaching and research programs. In the laser ablation procedure alone, Sinai Health physicians have trained medical specialists from more than 25 countries. They’ve developed practice models and have found that the window of opportunity for surgery is far wider than many had thought. And Dr. Ryan and his team have demonstrated that the laser procedure produces better outcomes than simply draining amniotic fluid and can even reverse heart damage in a fetus.

Yet he’s troubled that TTTS, a little-known condition, goes undetected until it’s too late in most cases. In Canada each year, 250 women have the condition, but only approximately 100 undergo the curative laser procedure.

A major signal for the mother is an unusual build-up of fluid, a sign that is too often missed. “The biggest challenge is dispelling the myth that if you have twins, you’re supposed to be really big,” Dr. Ryan says. “We need to make mothers aware there are certain things to watch out for if they’re carrying twins — particularly identical twins.”

“There are very few conditions that we can reverse in the womb, but this is one of them,” he adds. “If we can catch it, we can dramatically increase a baby’s chances, not just for survival, but healthy survival — without handicap.”

To learn more about the groundbreaking care provided by the Ontario Fetal Centre, visit www.ontariofetalcentre.ca