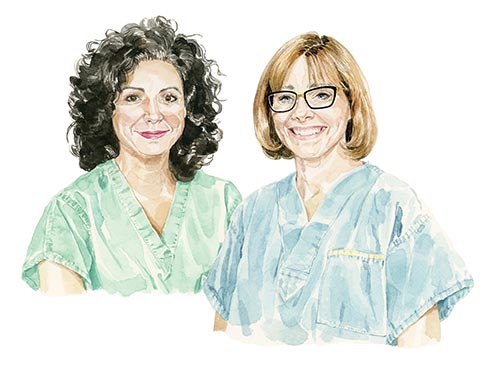 Inge’s “dynamic duo” shares what you need to know about living — and starting a family — with an ostomy.

What is an ostomy?

Dr. Helen MacRae: An ostomy is where you’ve brought the bowel out through the abdominal wall to the skin, so that the bowel is emptying into a bag instead of through the anus.

Who would benefit from getting an ostomy?

How does having an ostomy change your lifestyle or diet?

MacRae: Obviously, people with ostomies are not going to the bathroom normally anymore. But most patients who require an ostomy have been really sick because of the inflammation in their gut or due to perianal disease. Usually with an ostomy, their quality of life is better.

How does having an ostomy affect your ability to get pregnant?

MacRae: The ostomy per se does not affect it; it’s more the surgery to get one that might have an impact. We are operating in the pelvis, and that can cause scarring around the fallopian tubes and ovaries, which can make it more difficult for women to get pregnant. For some patients where we know pregnancy is a high priority, we will avoid doing the pelvic part of the surgery and do the ostomy from the abdominal portion of the intestines, the small bowel.

Dr. Jacqueline Thomas: As Dr. MacRae said, some women with inflammatory bowel disease may need in vitro fertilization (IVF) to get pregnant, because scar tissue from ostomy surgery has affected their fallopian tubes. IVF bypasses the fallopian tubes and puts the embryo directly into the uterus.

How does an ostomy affect your pregnancy?

Thomas: Most of the time the ostomy causes no trouble, but as the uterus grows it may cause problems such as bowel obstruction and pain. As well, if a woman who is pregnant has a flare-up of her Crohn’s, that not only makes her sick but it can also have adverse effects on the fetus, like preterm delivery. It is very important for the disease to be stable at the time of pregnancy.

How do you give birth with an ostomy?

Thomas: It is possible to give birth vaginally with an ostomy. With perianal Crohn’s disease, it is better to have a Caesarean section because you don’t want to risk tearing in the vaginal area — that tissue is not normal as it is affected by the Crohn’s, and may not heal properly or may promote the forming of a fistula.