The Challenge of Infertility 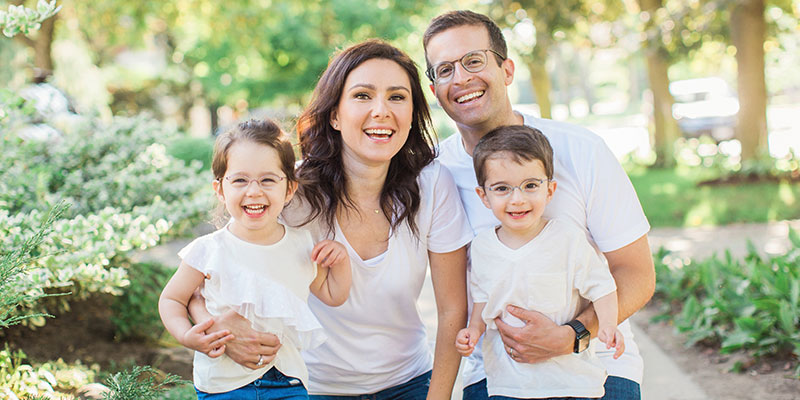 Above: Jordy and Pam Mecklinger with twins Hailey and Brandon (photo courtesy of: Mecklinger Family)

For Canadians hoping to become parents, starting a family can often be challenging. Infertility affects 15 per cent of couples in this country and male infertility contributes to about half of all cases.
‍
Jordy Mecklinger and his wife, Pam Mecklinger, understood those frustrations only too well. By the summer of 2013, excited to start a family but having no luck conceiving, they began the process of medical testing to figure out what was going on. Pam checked out fine but Jordy’s semen provided a surprise. “There were no sperm in the sample,” says Jordy.
‍
Infertility issues that involve not producing any or enough healthy sperm, and obstruction — where sperm are blocked from getting out — are experienced by one million Canadians. This, it turns out, was Jordy’s problem.
‍
Unbeknownst to him, Jordy has Cystic Fibrosis (CF), a chronic and often fatal disease of the lungs and digestive system. His version was mild enough not to cause serious symptoms. However, males who carry a CF mutation are born without vas deferens, the tubes that carry sperm from the epididymis, behind the testicles, to the ejaculatory ducts — effectively rendering them infertile.
‍
Jordy was referred to Mount Sinai Hospital, part of Sinai Health System, for genetic counselling and testing. At a rate of one in five with male fertility, “cystic fibrosis is the most common genetic abnormality,” explains Dr. Keith Jarvi, Head of Urology and Director of Mount Sinai’s Murray Koffler Urologic Wellness Centre (MKUWC).
‍
The discovery surprised and alarmed Jordy, and gave rise to all kinds of questions: “How could I be so healthy and have such a serious problem? Would I be able to have kids, and would I be healthy in the future?”
‍
was in good hands: the MKUWC is the largest clinic of its kind in the country and is at the forefront of spearheading techniques to combat infertility related to sperm production, quality, and/or quantity. More than 12,000 patients walk through its doors each year, from all over Canada and around the world. Dr. Jarvi — who also directs the Male Infertility Program at the University of Toronto — is a pioneer in the field, developing the use of minimally invasive techniques and a sperm mapping procedure to retrieve sperm.
‍
While the obstruction due to an absence of the vas deferens meant that Jordy had no sperm in his semen, tests showed he was, in fact, able to produce healthy sperm. Dr. Jarvi assured Jordy that by using a procedure called testicular sperm aspiration — in which sperm is retrieved directly via a needle — in vitro fertilization (IVF) would be an option. So in early 2014, in preparation for IVF, Jordy underwent the procedure which, he notes, “was fairly easy; like freezing a tooth”. One sperm was injected into each one of 11 eggs that had been harvested from Pam’s ovaries.
‍
Happily, Jordy and Pam became the proud parents of healthy twins, Hayley and Brandon, on September 17, 2014. “Now that our kids are more than three-and-a-half years old, it’s like nothing extraordinary happened — except it did,” says Jordy.
‍

Above: Jordy Mecklinger (pictured with wife, Pam) is passionate about combating the stigma around male infertility. He also feels a great debt of gratitude, and is committed to raising funds in support of Sinai Health System. He founded and is Co-Chair of the annual Leadership Sinai Porsche Rally — which is sponsored by DFC Auto Group and Peerage Capital, and is now in it’s third year.

‍
Due to advances in diagnosis and treatment, Sinai Health can now offer potentially successful treatments to many people — and new research breakthroughs are also underway.
‍
Dr. Jarvi and scientist Dr. Eleftherios Diamandis, an associate member at Sinai Health’s Lunenfield-Tanenbaum Research Institute (LTRI), have developed a new diagnostic test that promises to help avoid invasive testicular biopsies. It’s been licensed by LabCorp, a leading health-care diagnostics company. “The test shows whether there’s a good chance of finding sperm or not. You would operate if there is and avoid an unnecessary biopsy if not,” explains Dr. Jarvi.
‍
In addition, David Sinton, a professor and microfluidics researcher in the Department of Mechanical and Industrial Engineering at the University of Toronto, is collaborating with Dr. Jarvi in the development of a device that would select the strongest-swimming, most viable sperm for use in reproductive technologies. In research dubbed the “Sperm Olympics”, sperm raced down tiny, fluid-filled channels to the selection chamber. Sinton’s team discovered that sperm that slither, snake-like, move faster and may be more viable. They will clinically test and commercialize the sorting device, which can select the most viable single sperm from 100,000 for intracytoplasmic sperm injection (in which sperm are injected directly into eggs in a petri dish)— a technique that Jordy and Pam benefited from.
‍
Jordy and Pam conceived after their first IVF cycle, but many others aren’t so fortunate. “The success rate for assisted reproductive technologies has plateaued at about 33 per cent, partially due to the use of suboptimal sperm,” explains Sinton who, himself, is a father of two thanks to fertility treatment. “If our device can do a better job of selecting the sperm which is most likely to fertilize an egg, this has the potential to boost success rates and improve the health of offspring for patients in Canada and globally.”
‍
He and Dr. Jarvi are also collaborating to develop a low-cost, easy to- use home fertility test that could be bought in the drugstore. It would indicate whether there are any or enough healthy, motile sperm in the semen to conceive. “Guys don’t generally want to go to a lab for fertility testing, so it can take months or years to find out they have a problem. If they know sooner, this can make a big difference in timing and pregnancy success rates,” says Dr. Jarvi. He also notes that this aspect of fertility often can be improved with lifestyle changes, such as eating healthy, exercising, and avoiding smoking, alcohol and recreational drugs.
‍
Fighting stigma and raising awareness about the prevalence of these kinds of infertility problems are goals shared by Dr. Jarvi and Jordy. “No one talks about it because it’s socially unacceptable. When patients come to our clinic, they feel alone. We tell them how frequent it is, which normalizes it for them,” explains Dr. Jarvi.
‍
Jordy wants to build public awareness and acceptance by sharing the challenges and ultimate rewards of his own journey. “My personal mission is to highlight and end the stigma around this issue. It’s still very much taboo. Men suffer in silence because they’re embarrassed. They often become depressed and relationships fail as a result,” he says. “By talking about what I went through, though it’s difficult, I believe more men will go and get help.”