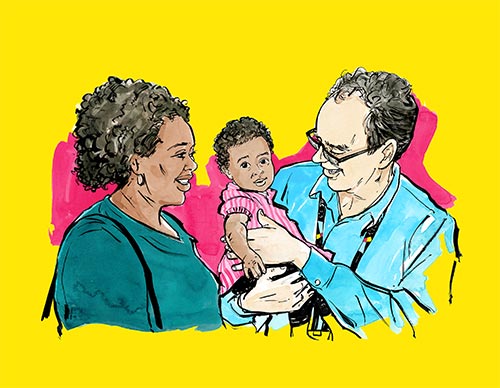 Dr. John Kingdom with patient Priscilla and her daughter, Nyla.

When Priscilla was pregnant with her second child, a sibling for her son, Kaiden, she developed preeclampsia, a serious cardiovascular disease that affects nearly eight per cent of pregnancies. Tragically, she lost the baby to stillbirth. When she got pregnant again the next year, she would require specialized care in case she developed the illness again.

What is particularly troubling about preeclampsia is that it can creep up silently, without obvious symptoms, until it becomes life threatening for both mother and baby. When symptoms such as high blood pressure become evident, oftentimes the only solution is to deliver the baby far too early.

Luckily for patients like Priscilla, doctors at Mount Sinai Hospital, part of Sinai Health, have revolutionized preeclampsia screening and diagnosis by adopting the use of a simple blood test. The test measures the amount of a protein called placental growth factor (PlGF) in the mother’s blood. High levels of PlGF are an indicator of a healthy pregnancy, whereas low levels are a sign that a woman’s placenta may not be functioning properly, causing her blood vessels to tighten up and putting her and her baby in danger.

In March of 2017, Mount Sinai became the first academic hospital in North America to use PlGF testing to help guide the care of pregnant women suspected of developing preeclampsia. “Now we use PlGF testing to determine which women may need to be admitted to hospital and which women we can send home to safely continue their pregnancy,” says Dr. John Kingdom, Staff Physician in the Division of Maternal Fetal Medicine and a national leader in the use of PlGF testing.

Dr. Kingdom has been investigating preeclampsia and PlGF in his research laboratory in the Lunenfeld-Tanenbaum Research Institute for 10 years. He and research associate Dr. Kelsey McLaughlin, who is a scientist with a focus on cardiovascular diseases in pregnancy, have been tracking the clinical use of the PlGF test at Mount Sinai in real time within the electronic medical record system, in collaboration with Dr. Sergio Carmona, Director of Medical Informatics at Sinai Health. After two years and nearly a thousand pregnancies completed, early indications show that PlGF testing is helping to reduce the number of unnecessary interventions.

The Sinai Health team is sharing data and creating a formal alliance with counterparts at Sunnybrook Health Sciences Centre, which will expand the reach of the PlGF test in the Greater Toronto Area. They are also working hard to ensure this game-changing test will be widely adopted by other hospitals and become included in the practice guidelines for all maternity care providers across Canada.

“Until PlGF testing was available, there was no easy way to predict who was at high risk for preeclampsia complications,” says Dr. McLaughlin. It is very important to have this new level of test precision because, as Dr. Kingdom says, “in 98 out of 100 cases, PlGF levels are normal, meaning you don’t need to intervene.” In the past, doctors have often erred on the side of caution by initiating preterm birth in women with high blood pressure because of the potentially serious consequences of letting the pregnancy continue, only to then develop complications from preeclampsia.

Even though I wasn’t showing the typical symptoms, it was there.

Inducing birth early (before 37 weeks’ gestation) is not without its own risks. Preterm birth is the leading cause of newborn illness and death in Canada. Lifelong effects for preemies can include cerebral palsy, chronic lung disease, hearing problems, vision deficits and cognitive delays. Any test that results in more babies being carried nearer to full term will provide better outcomes for babies.

Throughout her subsequent pregnancy, Priscilla was in good hands. Mount Sinai’s Frances Bloomberg Centre for Women’s and Infants’ Health, where more than 7,000 babies are brought into the world each year, is a national leader in caring for women with serious pregnancy complications and complex health conditions. It is also home to the largest women’s and infants’ health research group in Canada. The Placenta Clinic, where Dr. Kingdom is director, is recognized internationally as a knowledge leader across the range of medical and surgical complications of pregnancy that arise from an abnormal placenta.

At 35 weeks into her pregnancy, Priscilla was offered the PlGF test, and results indicated that she was “in the zone” to be at risk for preeclampsia. “Even though I wasn’t showing the typical symptoms, it was there,” she says, “and having that knowledge was very reassuring in creating my care plan.” Her health-care team, led by Dr. Kingdom, monitored her very carefully, sought to prolong her pregnancy as long as possible and scheduled the baby to be born by Caesarean section before problems emerged. In March 2017, at almost 37 weeks gestation, Priscilla delivered a healthy baby girl, Nyla.

For Dr. McLaughlin and Dr. Kingdom, this is the outcome they are working to create for every mother. They are grateful that Mount Sinai promotes innovation, and thankful that private donors such as the Alva Foundation enable cutting-edge research that saves lives.

For Priscilla, the experience was “amazing.”

“I can’t say enough about this experience. I would recommend Mount Sinai to anybody, any time.”