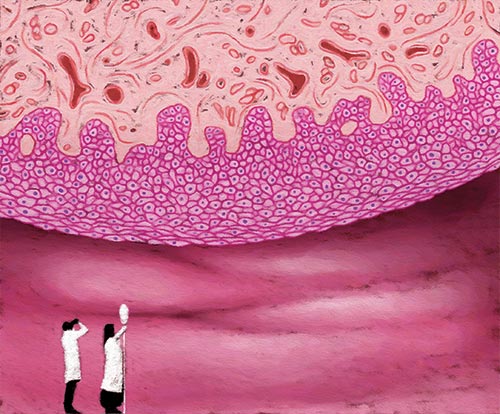 A new prenatal test being developed at Sinai Health will be as simple as a Pap test.

Imagine if prenatal testing was as easy as having a Pap test. A simple swab, taken early in pregnancy — with no risk to the fetus — would reveal or rule out chromosomal abnormalities and other genetic disorders, alleviating uncertainty for soon-to-be parents. This is the promise of an innovative test that is being developed at Sinai Health, in collaboration with the Department of Chemistry at University of Toronto.

The procedure, called NIPD (non-invasive prenatal diagnosis), is moving closer to becoming a reality, thanks to the work of Sinai Health experts Dr. David Chitayat and Dr. Elena Kolomietz, in collaboration with University of Toronto chemist Dr. Aaron Wheeler and his team. The group recently received a $3-million, phase-2 grant from Genome Canada, allowing them to continue this potentially groundbreaking research.

“If it works, it can change the whole world,” says Dr. Chitayat, who is a medical geneticist and Head of the Prenatal Diagnosis and Medical Genetics Program at Mount Sinai Hospital, part of Sinai Health. “This test could be offered to all pregnant women, including those in rural and remote areas who currently have no access to prenatal screening and diagnosis, and it does not need to be conducted by a physician.”

Dr. Chitayat’s clinical work in genetics is paired with lab work by Dr. Kolomietz, Co-Head of the Division of Diagnostic Molecular Genetics at Sinai Health. Innovating to improve care through research is an important mission for clinicians and researchers working at Mount Sinai’s Frances Bloomberg Centre for Women’s and Infants’ Health. The program is a national leader in caring for women with serious pregnancy complications.

Dr. Chitayat and Dr. Kolomietz have been working for years on an NIPD test and describe its potential benefits: It is a simple test that can be conducted by a doctor or nurse; it carries no risk to mother or fetus; it can be done much earlier than current tests — at five or six weeks’ gestation; it addresses the global inequality in prenatal care; it is inexpensive and will help doctors create more informed care plans with patients.

If it works, it can change the whole world.

The current gold standard tests available for prenatal diagnosis are amniocentesis and chorionic villi sampling. These tests carry a small risk of miscarriage and are generally only offered to couples at an increased risk for having a baby with a chromosomal abnormality.

Another option currently popular with couples, Dr. Kolomietz says, is a screening procedure called non-invasive prenatal testing. The drawback with this test, according to Dr. Kolomietz, is that it “does not detect approximately 200 chromosomal abnormalities, called microdeletion microduplication, that are collectively much more common — and some are significantly more severe — than Down syndrome. Many of those disorders have no signs that can be seen on fetal ultrasounds.”

The need for a better option is urgent. “There is a clear need and appetite for a comprehensive, non-invasive prenatal test that carries no risk of miscarriage and provides important diagnostic information,” she says.

Dr. Kolomietz set out to develop such a test in her lab six years ago, using samples from Dr. Chitayat’s clinical practice. The most difficult challenge in developing such a test is the scientific equivalent of finding a needle in a haystack: how to isolate pure fetal cells from the mother’s cervical mucus. The fetal cells are mixed in with maternal cells in the cervical canal at a ratio of 1 to 2,000. After trying many different methods in her laboratory to separate these cells, Dr. Kolomietz heard about the work of Dr. Wheeler, an expert in using advanced lab techniques to solve scientific problems.

He was thrilled to participate in the project, and work began to try to find and isolate the fetal cells in the maternal cervical mucus. Research in phase 1 of the team’s grant demonstrated that a technology used by Dr. Wheeler’s lab called digital microfluidics can isolate the fetal cells, so they can be used for genetic analysis. Now that phase 2 is underway, the team hopes to have a prototype ready for clinical trials within three years, and a complete test ready for common use in five years.

This cutting-edge work is part of a wave of new developments at the Lunenfeld-Tanenbaum Research Institute (LTRI), part of Sinai Health, to improve prenatal diagnostics and genetic testing.

Another advancement was made possible by an anonymous donation of more than $2 million to purchase a pair of state-of-the-art devices that can sequence the whole genome to identify mutations. This transformative technology will help Sinai Health researchers unlock the mysteries of their patients’ genetic makeup.

“This is an exciting era,” says Dr. Chitayat. “It is about empowering couples with information, allowing them to make informed reproductive decisions and removing the anxiety and fear associated with not knowing.”