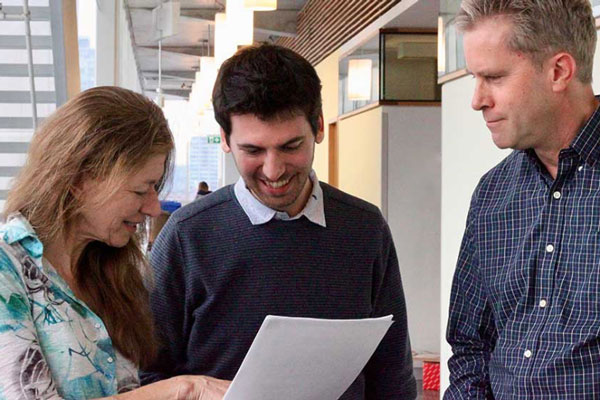 Sabine Cordes, a senior investigator at Sinai Health’s Lunenfeld-Tanenbaum Research Institute, left, talks with the University of Toronto’s Thomas Gonatopoulos-Pournatzis, center, and Benjamin Blencowe, right, a professor of molecular genetics in the Donnelly Centre for Cellular and Biomolecular Research, about their study appearing this month in the journal Molecular Cell.

A tiny gene fragment may play a pivotal role in why some people with autism also develop mental disabilities, according to new research from scientists at Sinai Health and the University of Toronto.
‍
Their study, published in the journal Molecular Cell, identifies a short gene segment, or microexon, that is crucial for brain development and information processing.
‍
Sabine Cordes, a senior investigator at Sinai Health’s Lunenfeld-Tanenbaum Research Institute, and Benjamin Blencowe, a professor of molecular genetics in the Donnelly Centre for Cellular and Biomolecular Research, led the study that describes how an absence of this segment leads to altered social behaviour in mice, as well as learning and memory deficits.
‍
“It’s very important to understand the mechanisms that underlie autism,” said Thomas Gonatopoulos-Pournatzis, a research associate in Blencowe’s lab and lead author of the study. “Not only have we identified a new mechanism that contributes to this disorder, but our work may also offer a more rational development of therapeutic strategies.”
‍
Autism can present in various ways—those with the disorder can have superior mental ability or need full time care. Where on the autism spectrum a person falls depends in large part on their genetics, but, for most cases, the genetic origin is unknown.
‍
For this study, Cordes and Blencowe assembled a team of scientists to look at microexons, tiny stretches of DNA that are located within many genes important for brain development and function.The team focused on a specific microexon located in a gene known as elF4G, which is critical for protein synthesis in the cell. They found that this microexon is frequently excluded in the brains of autistic individuals. Cordes said a surprise came when the mice engineered to lack this microexon performed poorly in a learning and memory test, in addition to demonstrating social behaviour deficits, such as avoiding social interaction with other mice.
‍
“Microexons may be small, but they can have dramatic effects on the brain’s development,” Cordes said. “This research shows the important impact that a single microexon has not only on social behaviour but also on learning and memory.”
‍
The findings are a result of collaboration between a group of scientists. LTRI researchers Anne-Claude Gingras and Graham Collingridge also contributed to the study, along with scientists from the University of Toronto, Hospital for Sick Children and McGill University.
‍
The researchers believe their findings may help explain a substantial proportion of autism cases for which no other genetic clues are known. The findings also open the door to the development of new therapeutic approaches. The research was made possible by grants from the Canadian Institutes of Health Research, Simon’s Foundation and Canada First Research Excellence Fund, Medicine by Design Program and support from donors Camille Dan and Glenna Duff.