Dozing as our newborn girl slept in her daddy’s arms, I tuned out the hospital’s PA system.

But code pink — baby in distress — triggers a particularly dramatic response. A dozen or so people materialized in our room, the sudden flurry of activity capped by a momentary glimpse of our little girl’s leg as she was lifted over the fray.

And then they were gone. After several moments of stunned silence, Leo released his anguish.

Joséphine Barry Smith Serieux — named for Leo’s grandmother and my father — is our three-and-a-half-year-old miracle. She’s healthy, clever and active, with a personality even bigger than her name.

In the moment, however — when you have no clue what’s wrong, and in the following hours when no one can say for sure why your baby stopped breathing, it’s no wonder parents of preemies often experience anxiety, depression and post-traumatic stress disorder.

But the miracle of Josie began before that wonderful and terrible day.


Leo and I were in our mid-thirties when we decided to have a baby. After several fruitless months, we were referred to Mount Sinai Hospital. Following numerous tests, our specialist was direct: At my age, egg quality would be our biggest hurdle.

I wasn’t quite ready for the costly, hormonally charged plunge into in vitro fertilization (IVF). We chose to ease into treatment with a “mock” cycle. The positive result was a welcome surprise after only a few weeks of daily blood work and early morning ultrasounds.

Leo and I felt both queasy and excited as we awaited our early pregnancy ultrasound. But the energy humming through me shattered the moment the absence of a heartbeat was revealed.

As we grieved for the child that had already taken hold of our hearts, we began to realize the toll each failed cycle could take. We decided to forego IVF.

I was 43 when Josie first made herself known. “Fertile Myrtle!” declared my physician, Dr. Anne Biringer. Unwilling to face another loss, I refused to acknowledge this pregnancy before we were sure.


“We are looking at …... a very large... fibroid.” After the deafening silence of the initial scan, the technician’s departure and swift return with the doctor, I had finally found the courage to ask.

“Okay,” I said. The growth on my uterus wasn’t a surprise. “But is there a baby?”

Determination personified, Josie was bound to be.

With profuse apologies for the suspense, the doctor summoned Leo from the waiting room. Together, we shared the first glimpse of our little munchkin and her steady heartbeat.


While the growing fibroid haunted me, Dr. Biringer focused on my mother’s history of high blood pressure in pregnancy. She referred us to Mount Sinai’s Placenta Clinic.

Dr. John Kingdom projects calm assurance. With the fibroid now larger than a cantaloupe, our baby was sharing space with a “twin.” Dr. Kingdom agreed to share our care with Dr. Biringer. He advised us to plan for an induced delivery two weeks ahead of the baby’s due date.

To my growing relief, the pregnancy progressed well. It wasn’t until 31 weeks that my blood pressure crept a little too high. Dr. Biringer sent us to Mount Sinai’s labour and delivery unit.


Whoosh. Whoosh. Whoosh.
The steady rhythm of our baby’s heartbeat as she floated, warm and comfortable in my belly, was calming while medication brought my blood pressure under control.

We were admitted to hospital for observation. The wonderful nurses in the antenatal unit proved proficient at fetal hide-and-seek games. Every time the sound of munchkin’s heartbeat faded away, they invariably found her again as I prayed for more time.

We knew Mount Sinai offered the best possible preemie care — we just didn’t want to need it. An ultrasound revealed Josie’s budding dramatic flair. Grabbing her umbilical cord, she was cutting off her oxygen before startling back into action.


Our reprieve from the hospital only lasted a couple of weeks before rising blood pressure brought us back. The second discharge came with instructions to see Dr. Kingdom in two days.

As he performed the ultrasound, Dr. Kingdom studied the monitor carefully. I knew that our time was just about up. While high-risk pregnancy specialists do all they can to allow babies to develop in mom’s womb for as long as safely possible, sometimes their expertise comes down to recognizing the tipping point when the risks of pregnancy outweigh those of an early delivery.

Between preeclampsia — the condition nudging my vital organs towards failure — and competition with her fibroid “twin,” Josie’s growth had stalled. We were admitted — again — to the labour and delivery unit.


Dr. Biringer checked in with us early the next morning. The obstetrics team wasn’t happy with munchkin’s diminishing activity, and there was no sign of progress towards active labour. We were scheduled for a mid-afternoon Caesarean-section.

Yet Josie was determined to come into this world on her terms. As our time approached, something seemed to be happening. A quick check revealed it was almost time to push (epidural anesthesia is amazing). Dr. Biringer “caught” our little girl and lifted her for Leo to cut the cord.

The moment she was placed on my belly, our voracious little munchkin immediately sought out her first meal. Weighing in at just over four pounds, eight ounces, she appeared healthy enough to come home the next day. I finally dared believe we’d made it.

Hours later, Josie’s failure to breathe sent us to the neonatal intensive care unit, or NICU.


While it’s impossible to overlook babies encased in incubators, some small enough to fit in your hand, I find the hush of the NICU the most unsettling. “A crying baby is a healthy baby,” my late father — a neonatologist himself — used to say.

Having grown up around NICUs, I wasn’t alarmed by beeping monitors. The biggest challenge was that Josie was hungry. Whenever I dared slip away for a quick snack, she would awaken to loudly demand her next meal.

Shell-shocked parents gathered in the family lounge at mealtimes. A few minutes of very welcome respite provided by a massage therapist stationed there one evening — thoughtfully arranged by the unit’s parent ambassadors — stands out vividly among the muddled memories of our stay.

As the domain of exhausted moms doing everything in their power to provide milk for their preemies, the pumping room was my other escape. Seasoned NICU moms, whose babies had been there for months, shared insights while sterilizing bottles and equipment. “The car seat test is the sign that you’re going home,” said one. 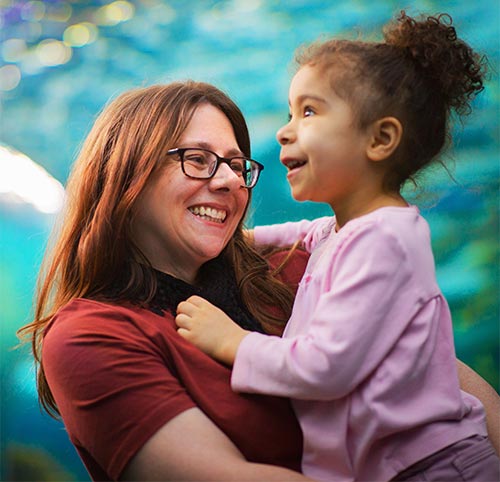 Jennifer and her daughter, Josie, at Ripley’s Aquarium of Canada, one of Josie’s favourite places to visit.

For us, the golden ticket arrived two weeks after Josie’s admission. Her care team gathered to see us off. Dr. Kin Fan Young Tai and Nurse Practitioner Lee di Fonzo, who had both known my dad, shared memories of the grandfather who would have doted on our little girl.

As we departed, one of our nurses winked at me knowingly. “Good luck with the little lady Joséphine!”


“Bye mommy!” Josie kissed me as I left for the hospital. “See you later!”

Although Josie’s “twin” shrank after her birth, it was growing again. I’d explored treatment before becoming pregnant, but put it off when I learned major abdominal surgery would be unavoidable.

Lucky for me, Dr. Jonathon Solnik, Head of Gynaecology and Minimally Invasive Surgery at Mount Sinai, was recruited from Cedars-Sinai in the meantime. He outlined a number of far-less-invasive options. On the day of the procedure, he reconfirmed every detail of our plan.

A few hours later, I was home. Regular Tylenol kept me comfortable over the next couple of days, and I was back at work in just two weeks. Three imperceptible “keyhole” scars and a small incision hidden in my belly button are the only visible evidence of the surgery.

In fact, keeping our enthusiastic, active munchkin at bay while I healed proved the only challenge with my hysterectomy.


Gratitude: The word falls short of our feelings towards everyone involved in our care, including the donors who support the Frances Bloomberg Centre for Women’s and Infants’ Health being the premier program it is today.

Determination personified, Josie was bound to be. But she wouldn’t be here today without the outstanding care and support provided through every step of our journey. We feel blessed to have benefited from the commitment to caring for people — for families — that is at the heart of Sinai Health.

Thank you for helping our miracle make her way into the world.

Story by Jennifer Smith | Photos by Tim Fraser, with thanks to Ripley’s Aquarium of Canada