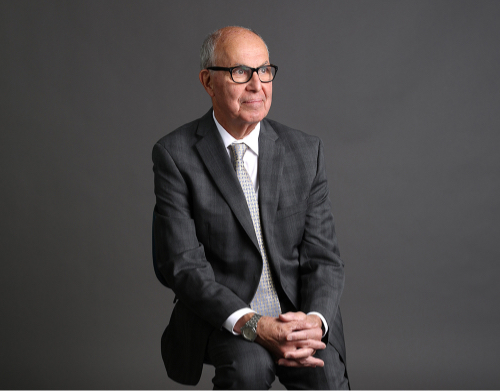 Dr. Paul Bernstein has been one of Toronto’s most beloved obstetricians for nearly 45 years. Having attended more than 15,000 births over his career — in some cases delivering three generations of babies in a single family — he has become accustomed to being approached by grateful former patients.

An award-winning professor and mentor, Dr. Bernstein delivered Mount Sinai’s first quintuplets. He also saved the life of one particularly grateful patient who developed a frightening condition — a very rare and potentially deadly amniotic fluid embolism. Dr. Bernstein’s superior medical acumen has earned profound trust from his patients, but the memory that many treasure is of his warmth, compassion and calm composure.

Zak and Michelle wanted to be there for Mount Sinai to address its greatest challenges. Just like the hospital was there for them

You always know the hospital is there for you. But you really don’t understand what the hospital does until you or someone you love is a patient there.”

Zak Goldman is speaking from the heart. Ten years ago, he and his wife Michelle found themselves at Mount Sinai Hospital after Michelle experienced severe complications from her high-risk pregnancy. At the time, Michelle was six months pregnant with their identical twin boys, Blake and Avery.

Days after Michelle was admitted to the hospital, an ultrasound revealed that their son Avery’s heart had stopped beating, prompting the need for an emergency Caesarean section — only 26 weeks into the pregnancy. Blake was born weighing 1.4 lbs. Unfortunately, Avery did not survive.

For the next six and a half months, Blake remained in what is now the Newton Glassman Charitable Foundation Neonatal Intensive Care Unit (NICU) at Mount Sinai, with his parents at his bedside. Throughout this heart-wrenching time, Zak and Michelle found comfort in the care and compassion they felt from the hospital staff.

“The incredible NICU team at the hospital did everything for Blake,” says Zak. “And they were so thoughtful and understanding about Avery. They became like family.”

Deeply impacted by their loss but also by their care team’s extraordinary commitment to helping save Blake’s life, Zak and Michelle have been dedicated supporters of Mount Sinai’s Frances Bloomberg Centre for Women’s and Infants’ Health ever since. The couple made a legacy gift of $1 million to Sinai Health through the Avery Goldman Fund, created in memory of their late son.

More recently, when Zak and Michelle learned of Sinai Health Foundation’s unique Life Insurance Matching Program, the couple was motivated to make an additional $1 million legacy gift that could be turned into a larger legacy through the matching program.

“To us, it was a no-brainer,” Zak says of the opportunity to further benefit the organization that helped save their son's life. “If we can give another million dollars on top of what we’re giving, why wouldn’t we? Insurance has allowed us to give so much more to the hospital. And over time I think it allows the hospital to plan long term.”

As for how they would like to see these funds used, Zak believes those decisions are best left to Sinai Health. “Our goal with these funds is to let the hospital decide where they need the money to go,” says Zak. “There are so many needs that the hospital has every day. We want them to make the decisions that are right for them.”

Unrestricted funds such as the Goldmans’ gifts enable Sinai Health to remain nimble and take advantage of opportunities to improve care and patient outcomes. Such funds, for example, were critical to the capital upgrades recently undertaken to revitalize Mount Sinai’s Women’s and Infants’ Health units. Among the upgrades was a transformation of the NICU from a single open space, where all infants were cared for side-by-side in a relatively large hall, to individual rooms for each baby that now afford families greater privacy and more opportunities to get involved in the care of their babies.

“With the redesign of our NICU, we have made a significant change in the care that we can provide,” says Dr. Prakesh Shah, Paediatrician-in-Chief at Mount Sinai. “Families can now come and spend time with their baby in their own rooms and stay as long as they want to be with their newborn baby. It has allowed us to enhance our family-centred care approach and at the same time allowed personalized care to each and every baby in the unit.”

1001-522 University Avenue
Toronto, Ontario M5G 1W7
supportsinai.ca
Sinai Health Foundation No. 119048106 RR0001
Bridgepoint Foundation No. 119290773 RR0001
Arthritis Research Foundation No. 889234399 RR0001
Copyright © 2020. All rights reserved.
2019/2020 Report to Our Community
HomeA message from Sinai Health leadershipNew & NoteworthySpecial thanks to our Sinai Health communityBoards of DirectorsFinancialsSinai Health by the numbersOur Donors
Game changersDifference in the detailsReady to deliverWhen help is needed mostA place of healingMoved to give backA family commitment to next-generation careSurrounded by care